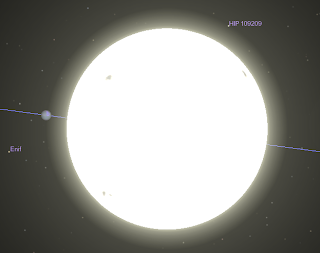 HD209458b is a bit of a superstar for a world whose name is a hodge-podge of letters and numbers. The first world to have been discovered by transit, dimming the light of its star as it crossed it, and the first planet to have its atmospheres composition probed, HD209458b is in the news again.

In a remarkable piece of research, astronomers have been able to precisely measure the mass of this world, and also to measure the speed of the winds in its upper atmosphere.

And what speeds they are, the winds whip across the world at a blistering 7,000 kilometres per hour, around 6 times the speed of sound at sea level on Earth. Blistering is the word in many ways. This world is a “Hot Jupiter”, orbiting its sun (which is bigger and hotter than ours) far closer than Mercury orbits our Sun. It orbits its sun in roughly 3.5 days (compared to 88 days for Mercury), its “surface” temperature is around 1000 deg C and it is in fact evaporating! HD209458b is tidally locked, which means that one side is always facing the glare of the Sun, and one side is facing darkness. The hot atmosphere on the day side hurtles over to the cooler night side, generating ferocious velocities that make the storms on Jupiter look sedate.

The astronomers measured the winds by looking at the minute shifts in the absorption spectrum of atmosphere as the planet underwent its transit. You have probably heard of the Doppler Shift, where the frequency of sound or light is changed depending on whether the source is coming towards you or moving away from you. The astronomers were able to detect the minute shifts in the absorption band of carbon monoxide in HD209458b’s atmosphere (which is mostly hydrogen, like Jupiter). They were also able to detect the slight shifts cause by HD209458b’s orbit around its sun. This allowed the astronomers to precisely calculate its orbital velocity (140 kilometres/second), and determine its mass accurately (0.69 Jupiter’s mass). This is another exoplanet first.

Amazingly, this was all done with earth based telescopes, when the new generation of super scopes comes online, what more can they accomplish?

HD209458b is already in the Celestia catalogue of extrasolar planets, but you will have too look under either V376 Peg or HIP 108859 in the “stars with planets” catalogue, if you use the “go to object” dialog box, type HD 209458 not HD209458. You way want to edit its entry with the new orbital parameters though (always back up your source file first).