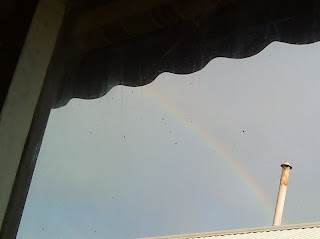 The skies should be reasonably clear in Australia for tonight's partial Lunar eclipse. Midn you soon as I had extolled the virtues of the eclpise in this mornings radio interview, the sky came over all dark and rainy. The rainbow shot was taken this morning after the interview while we were making breakfast in bed for the Bettdeckererschnappender Weisle.

But it doesn't matter so much, even if it is cloudy, because the lead-up to maxi,um eclipse, and the maximum eclipse itself, last a reasonably long while. So you can pop out and watch for gaps in the cloud, or the eclipsed Moon shining through the cloud (which would be a cool effect). 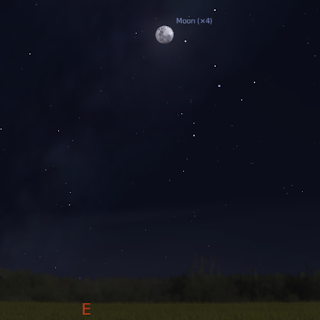 So what is the best way to watch the eclipse? Well, with the unaided eye to start with. The sight of the shadow crawling over the Moon will be awesome, and you can watch the sky darken and the stars pop out as the eclipse progresses. Over in the west, Venus, Regulus, Mars and Saturn form a line, and are a nice accompaniment to the ongoing eclipse. You may even see a satellite going over.

You can use binoculars, the eclipse will liook quite nice in binoculars, and you will be able to see the darkened part of the Moon. 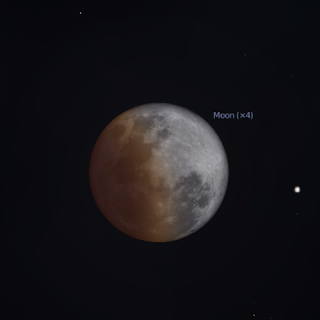 In a telescope, you will notice that the Earth's shadow is not sharp. You can use a low power lens to see the entire Moon to best effect, or with a high power scope you can time when various craters are covered by the shadow.

Photographing the eclipse can be done with simple digital cameras. You can just point the camera through your telescope lens and press the button, that works! For binoculars though, even at maximum eclipse the Moon is too bright and the bright part will be over exposed. 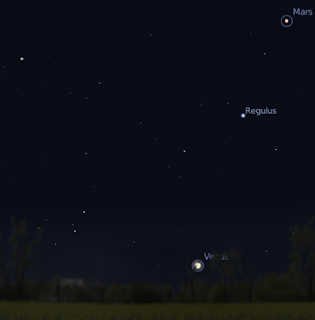 Comments:
My son was disappointed that the moon didn't go red, but we could watch it through the rainbow observing skylight !
The FSM chased the mutant star goat away before the moon was fully consumed !

Hi Ian Musgrave, I have been reading your interesting articles on the recent Lunar Eclipse and came across your comments about astrologers using a 4.000 years old sky map.
I am myself a serious student of astrology and I would like to clarify this point here. Western astrologers do not use the Sidereal Zodiac (that has indeed shifted so many degrees since Babylonian times) but the Tropical Zodiac. When we say the Sun is entering Aries (0 degree) we mean, for instance, that the Sun will be perpendicular to the Equator at noon (Equinox)and not that the backdrop of the Sun will be the constellation of Aries. The Signs of the Western Zodiac are seasonal markers nor stars and constellations markers.
The confusion is due to the ignorance of many people, including practicing astrologers who should know better, mixing up the Sidereal and Tropical Zodiacs.
Your site is very informative, I always consult it to pick up the dates of important observable events.
Being made fun of because one practice astrology is nothing new; I am used to it, as many other practioners of this ancient art. Sometimes I wish the people who criticize astrology would take some time to learn more about the subject from reliable sources.
Thank you for the obvious effort you are putting on your blog.
Ciao for now, Paola Emma

G'Day Paola. Some Western astrologers DO use the Sidereal Zodiac. As you yourself said. If you are going to use seasonal markers, give them names that are different from the actual constellations that used to live there.

Turn Your Radio On
In Which I Back Away Slowly
A Storm World
Don't Forget the Partial Lunar Eclipse this Saturday.
Carnival of Space #159 is here.
Yet another Ring Around the Moon
The Sky This Week - Thursday June 24 to Thursday J...
Flare Fun
Happy Winter Solstice!
Partial Lunar Eclipse, June 26, 2010