In Which I Back Away Slowly 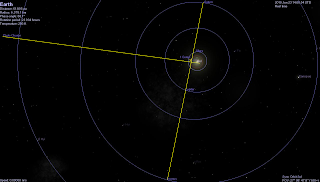 Not a Grand Cross, on the night of the lunar eclipse on June 26, Pluto, Mercury, Jupiter and Saturn do NOT align with the Earth and Moon. The X shows Earth's location and the red circle is Earth's orbit. You will definitely need to click on the image to embiggen.

Idly looking at eclipse information on the net, I stumbled upon this site, which is the 7th site linked to in Wikio’s eclipse listings (It used to be about 3rd, after two sites about about sparkly Vampires, but dropped over the past 24hrs, sadly, Sparkly Vampires are still the top two sites).

Now, I have no truck with astrology, which is a load of foetid dingos kidneys, but this site bemused me somewhat. To start with it says “Lunar Eclipse in Capricorn”. Umm, the Moon will actually be in Ophiuchus that night with the closest classical constellation Sagittarius; Capricorn is far away. Then I remembered that many astrological systems haven’t corrected for the precession of the equinoxes. (video explanation here), the slow wobble of Earth’s axis over the centuries. These astrologers still use constellation locations that were current when the Sumerians were looking at the sky, 4000 years ago (and these astrologers constellations are rectangular slabs of the sky that bear no relationship to modern constellation boundaries). Why the “mystical” properties of a slab of sky that hosted the constellation Capricorn 4000 years ago should remain the same when the actual stars are somewhere else is not clear.

A lot of people are afraid of this eclipse and while this is understandable, I don’t think there is real cause for concern.

Why one earth would people be afraid of this eclipse, it’s just the Moon going through Earths shadow! If the Moon and Earths orbit were perfectly aligned, we would have a lunar eclipse every full Moon, and a Solar eclipse every New moon. But because the Moons orbit is tilted with respect to Earth we have to wait until a Full (or New) Moon coincides with the Moon crossing Earths plane of the ecliptic. This happens about twice a year, but not everywhere on Earth can see them (we will have three lunar eclipses this year, there is a total Lunar eclipse later this year, but it happens near sunset for us Australians, so most people in Australia will not see it). So while lunar eclipses are not common, they are not rare and a trivial consequence of the Moons orbit.

It is dramatic with the Sun, Moon, Mercury, Jupiter, Saturn, Uranus and Pluto involved but we are talking about a hard core grand cross here. 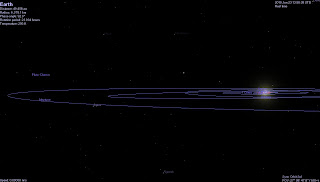 Say what? How is Mercury, Jupiter etc. involved? The Moon crosses Earths shadow, that’s it. Mercury has nothing to do with making the Moon enter the shadow, it’s pure orbital mechanics*. Oh, wait a minute; there’s a “hard core” grand cross here is there. Hmmm, well, for some definition of “cross” that means “not very much like a cross at all” (see the diagrams above). You would expect that if Sun, Moon, Mercury, Jupiter, Saturn, Uranus and Pluto are “involved” then you might expect that if you drew a line through the Sun, Earth and the Moon it should intersect some of these objects. Well, if you draw a line through Earth/Sun/Moon it, ummm, goes nowhere near these planets (see the diagrams above). Mercury and Pluto do align in the sense that they will be almost directly opposite each other as seen from earth, but on the 27th. On the 26th Mercury is over 2 degrees from the Earth/Sun/Moon axis, and Pluto is over 5 degrees from the Earth/Sun/moon axis.

Jupiter and Saturn form a line as well, any two points will after all. Jupiter and Saturn did line up through Earth … on May 26, they don’t on June 26. A line dawn through Jupiter and Saturn not only doesn’t intersect the Earth (or the Moon, see the first diagram, earths orbit is a red circle, and X marks where Earth is on the 26th.), it doesn’t intersect the Pluto-Mercury line (it looks that way on the diagram, but that is because it is seen from above, the Pluto-Mercury line passes above the Saturn Jupiter line). You can continue the line from Jupiter to Uranus, but only if you jog the line down and to the side (it’s a bit hard to see due to the scale on the diagram, but in second diagram you can see Uranus is below and away from the Jupiter-Saturn axis). You can play with this in Celestia to get a feel for what is happening.

Now, I know that in astrology anything within 5 degrees of each other is considered “aligned”, but to call something a “hard core grand cross” when it doesn’t actually cross the Earth (or the Moon), the lines don’t intersect to form a cross anyway (they come within about 6 lunar diameters of each other at the “intersection point”), and the “Cross” is more like a crooked “T”; how this is “hard core”?

My recommendation is you look at the thing like you do the sky, lit up on the 4th of July as things are rarely this boldly drawn.

Okay. Well, the eclipse will be pretty. When the Moon enters the umbra, the dark inner shadow of Earth, Venus, Regulus, Mars and Saturn will be sinking in the west. At the deepest part of the eclipse Mars and Saturn gleam low in the west, but Jupiter (and Uranus) doesn’t rise until well after the eclipse has ended (and after Saturn has set). Uranus and Pluto are not visible anyway, and Mercury is lost in the glare of the Sun. Beautiful yes, boldly drawn? I think not.

I’ll back away slowly now, and enjoy the eclipse to the sound of the Bettdeckererschnapender Weisle’s accapella choir (weather permitting)

**Unless involved means “somewhere vaguely in the same region of the sky.” Not that this degree of “alignment” can’t be pretty though, on 8 August Mars, Venus and Saturn are all within 5 degrees of each other, and that will look very nice indeed. On 13 August the crescent Moon, Venus and Mars can just fit in a circle 6 degree across, that will be pretty too. But these distances, small enough when measured on the sky as seen from Earth, are actually huge and well beyond what one could say is “involved” with the eclipse.

Comments:
nice !! such a good things shared by the author of this blog about the astrolife.
astrology is the perfectly depends upon the sun, moon and all the planets positions and every astrologer can tells you the things about your future on the basis of the position of your planets.
"in the vedic astrology it is believe that every one has different effects of the planets , sun & moon on their lives" .

so with this science & calculations astrologers can tell you the futuristic aspects about you & your life.