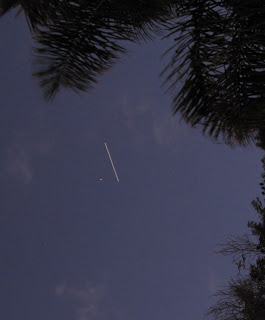 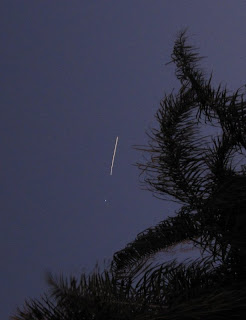 Yes, I know they are actually sideways, it's a blogger thing, they are the right way around in GIMP and other image viewers.

Monday's ISS pass was completely clouded out, and Wednesday night's looked pretty sad too, then at least enough clouds cleared to get a decent stab at it. The early part of the ISS rise near Venus was clouded out, but it briefly appeared near Mars and Regulus, then brightening considerably slid under Saturn, the off for a close encounter with Spica. Sadly, the button on my Cannon IXUS seem to have been designed for squid, so by the time I pressed the "go" button it had moved past Spica. Still, a very nice pass indeed.

Comments:
I am not sure i think i saw it too. adelaide weather was fine yest night. However, i did saw one more near the moon yesterday morning. I can confirm it isnt any jet plant as it has not smoke tails. So i d think it was another iridium flare of some sort. correct em if i am wrong. thanks

Depends what time. Yesterday at around 6:05 am there was an iridium flare low in the northern sky, halfway between the Moon and Jupiter but lower to the horizon. Around 6:00 am there was also a COSMOS satellite pass just above the moon (although they wouldn't have been very bright)