The Sky This Week - Thursday May 27 to Thursday June 3

The Full Moon is Friday May 28. Venus is readily visible in the twilight. Saturn is seen in the evening above the northern horizon near the bright stars Regulus and Spica. Mars is very close to Regulus. Jupiter is easily seen in the morning sky, with Mercury below it. 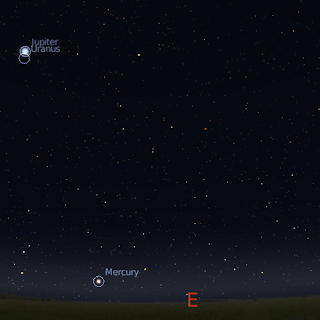 The morning sky facing north-east in Australia on Sunday May 30 at 5:30 am local time showing Jupiter, Uranus and Mercury.

The Full Moon is Friday May 28.

Mercury is in the morning sky and is visible low to the horizon below Jupiter. Mercury is at its best this week.

Jupiter is clearly visible in the north-eastern sky as the brightest object in the early morning. Jupiter is now high enough for telescopic observation to be rewarding. Jupiter looks a little different now that one of its bands has disappeared. Jupiter and Uranus are close together and can be seen near each other in a pair of binoculars. They will be at their closest next week. 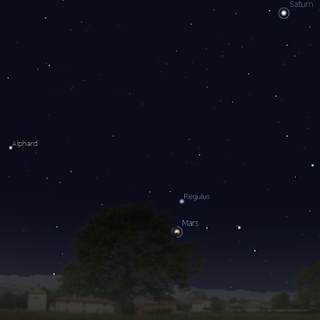 Bright white Venus is now readily visible above the western horizon from half an hour after Sunset, (even before) until past the end of twilight (about an hour and a half after sunset). On Friday 28 May Venus is very close to the moderately bright star Metsuba in Gemini.

In the evening Mars can be seen low in the north-western sky. It has faded a lot, but is still the brightest (and clearly red) object in that part of the sky. Mars will be just under Regulus, the bright star in Leo the lion at the end of the Week. However, the closest approach to Regulus will be newt week.

Mars forms a line with Regulus, Saturn and Spica.

Saturn is rising before Sunset and is easily visible in the evening sky as the bright yellow object between the bright stars Regulus and Spica, just up from Mars. Now is still a very good time for telescopic observation of the ringed world. Saturn is quite high in the sky for the best telescopic views at around 8 pm. Saturn's' rings are opening, and look quite beautiful, even in a small telescope. On the 2nd of June, Saturns' Moon Titan cruises just below the planets south pole.

Don't forget about the competition!

Comments:
Thanks',
The ring of Saturn still in a horizontal pattern, I've been waiting for a long time for it to widen a bit for a few shots :-)...

A Nice Shot Of Venus and the Moon.
Carnival of Space #154 is here.
The ISS Was Really Bright - Woot!
Using The Gimp for Astrophotography (Part 2)
Morning Space Station on the Weekend
2000 posts! Time for a competition!
Book Review: Paradise Regained.
Daytime Venus using a Mobile Phone (just)
Daytime Venus Rides Again!
The Sky This Week - Thursday May 20 to Thursday Ma...