The ISS Was Really Bright - Woot! 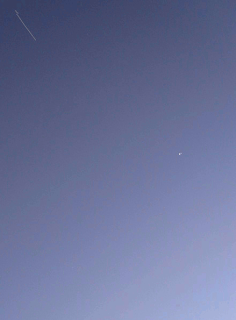 The ISS heads for Jupiter on the morning of May 22, 2010 as seen from suburban Adelaide.

I got up far too early to prepare for the International Space Station pass. But dressed in my warm woollies with a cup of hot tea in hand I watch the stars fade into the twilight in anticipation. There was an extra delight as there was an iridium flare at 6:12 while I was setting up.

I also did a quick telephone interview with 891 Adelaide Local radio to extol the virtues of watching the ISS over head. Unfortunately I forgot Thierry Legault's name, so people couldn't go searching for his amazing images.

6:30 rolled around, but not the ISS. I scanned the sky anxiously, hoping I haddn't mislead anybody, inluding the radio listeners. Then the ISS appeared over the top of the house it was hding behind, astonishingly bright, and started it's course across the sky. 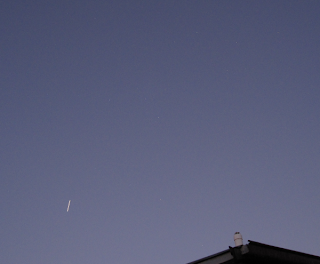 The ISS appears below the hook of Scorpius's tail, click to embiggen.

The ISS sailed high up to near the zenith, passes down beside Jupiter, fading as it went. The pictures do not do it justice.

Here's my animation of the ISS going past Jupiter. How was your ISS experience? Do you want to write it up for the competition?