The ISS returns to the evening skies. 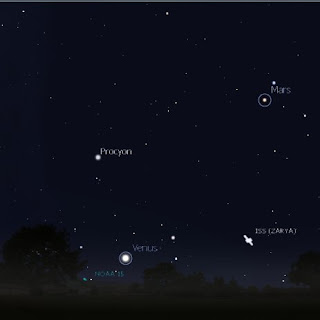 The International Space Station glides past Venus and below Mars at 6:35 pm ACST as seen from Adelaide (no, the ISS will look like a bright star, not like a spacecraft, that's the way Stellarium 10.3 displays it)

The International Space Station returns to the evening sky this weekend for most of Australia, and can be seen in the early evening for about a week. A couple of passes will be very bright (almost as bright as Venus) and will pass very close to the bright planets Venus, Mars and Saturn. The sky will be either quite dark or in late twilight and the ISS and Venus will be very obvious.

In Southern Australia (South Australia, Victoria and Southern WA) the ISS is seen on Monday evening (31 may) at roughly 6:35 pm (SA, WA) or 7:07 pm (VIC) local time. It will be not far from bright Venus in the north-west. In Adelaide at 6:39 am the ISS will be passing Mars. In Perth this is more like 6:40 pm, and in Melbourne the ISS enters Earths shadow before reaching Mars.

On Wednesday June 2 Southern Australia is again treated to the bright ISS going past the bright planets about 45 minutes earlier in the twilight sky. Then on Thursday June 3 the ISS passes to the South, past bight Sirius and the constellation of Orion

NSW and QLD don’t see anything as near as spectacular, but on Tuesday June 1 the ISS passes close to the bright planets on as seen from Sydney and passes Sirius and Canopus as seen from Brisbane.

For exact predictions for you local site see http://www.heavens-above.com/

Evening Triple -Venus, Moon and Mars
Post 2000 - Chasing the Eclipse
Last Day for the Competition.
The Sky This Week - Thursday May 27 to Thursday Ju...
A Nice Shot Of Venus and the Moon.
Carnival of Space #154 is here.
The ISS Was Really Bright - Woot!
Using The Gimp for Astrophotography (Part 2)
Morning Space Station on the Weekend
2000 posts! Time for a competition!