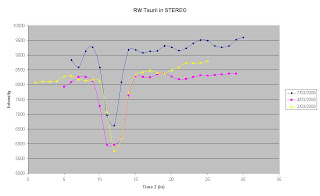 Your probably getting sick of the "Watch Ian painfully learn photometery by trial and error" business, but you might be interested in this phase fold of the Algol type variable RW Taurii. It's around magnitude 8, so far more relevant to exoplanets, even though it has a much deeper eclipse than any exoplanet. I'm still having no luck trying to account for background drift. I've tried another method, averaging intensity over a patch of pixels, but that didn't work. I still have no way to normalize intensity over different STEREO runs.

But the field was fantastic, in the stack, you can watch the California Nebula, see Comets Holmes and Wiratannen move across the field, see several asteroids including Ceres and Amphrite, as well as watching RW Taurii blink on and off. Rather nice indeed.