Comet 17P Holmes and the California Nebula in Stereo 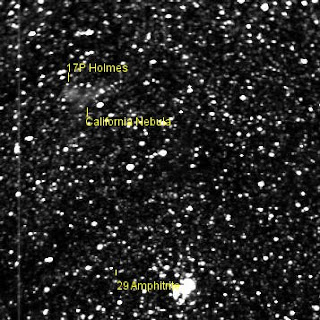 Between 26 February and 7 March the amazing Comet Holmes scooted past the California Nebula. I was unable to see it from my southerly location, but the Stereo Secchi imager H2a got some shots of it. It's not as good as these amazing images by Dave Kodama, (see also here and here) and by Rolando Ligustri, but hey, they will do for me (the big blob is the Pleiades).

I've posted an animation below, 29 Amphrite is also in the frame, but it's hard to see in the Google Video, you are going to have to download the avi (1.1 Mb) from here, and then run it at 2x magnification to see this asteroid easily. Just below Amphrite is what appears to be another asteroid, but nothing appears on my star maps. An artefact or a real unknown object? (update: Comet Al has identified this as 46P/ Wirtanen) 1 Ceres was also clearly visible, but is outside the area of this animation.

In making these images I've just updated ImageJ to version 1.39u, and it rocks! Finally got the Z profiler to work, and the Astrometry program is sort of working, so I will have another go at exoplanets real soon.

Comments:
Gidday Ian,
Nice work. The extra asteroid, traveling up and to the left . I think this is Comet 46P/Wirtanen.
I am very sure it is, It and holmes have faded from the FOV now.

Yep, it's Wirtanen. Right speed angle and, when I correct for parallax, position. Good catch Al (next time I'll remember to turn on the low intensity comets as well).