Is this a tranisting exoplanet? 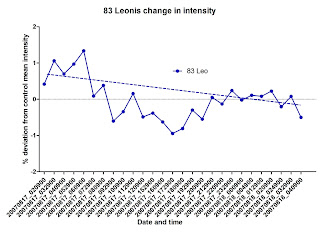 No, probably not. (I should be used to this)

This is an intensity trace of 83 Leonis (HD190360 click image to enlarge) assembled by stellar photometry from STEREO images, taken over the time of a predicted transit (17-18 August 2007). 83 Leonis is known to harbour a transiting Saturn-sized exoplanet (well, sort of, no one has actually seen a transit yet, but it is predicted to transit). It is a good STEREO candidate as it is fairly bright (magnitude 6.5) almost slap bang in the middle of the Secchi H1 field (where there is less distortion) and it has a fairly deep transit (which should rise above the inevitable noise).

So, the trace shows what appears to be an observable dip in intensity. The dip in intensity is roughly the right depth (1% vs predicted 1.95), the minimum is close to the predicted minimum, but the dip is a little too broad (the transit should be 4 hours wide, this is more like 6).

And it is noisy, especially the early measurements, during the 17th. The noise suggests this is all artefact. 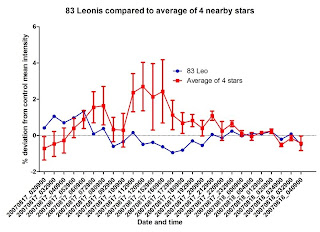 Of course, I've compared the trace from 83 Leonis with nearby stars of similar magnitude (80 Leonis, A2777 etc.), and they are also, ahem, noisy. One thing they all seemed to have in common (apart from a bucket load of noise), is they all seemed to be going up in intensity when 83 Leonis was going down and down when 83 Leonis was going up. So I averaged the values from the 4 stars closest in brightness to 83 Leonis (the dimmer stars were more variable), and compared the average to the 83 Leonis trace.

I should explain that to make these figures I have taken the raw intensities, subtracted the background, then expressed them as a percent of the average of the last six raw intensity values (you can use the last value, or the average of all values, the pattern is the same). You can't effectively compare the raw traces as they differ substantially in intensity (for 3000 to 9000 arbitrary intensity units). Expressing everything as a percentage change in intensity makes them comparable.

Now the values can drift because of differences in pixel sensitivity, effects of coronal mass ejections, systematic differences in the regions of the chip and just plain randomness. If the changes in intensity in the stars on the chip of the H1 imager are random, then averaging them out should cause the values to regress to the mean. If there is systematic error, this should be picked up by averaging too. The stars I've picked are all close by 83 Leonis (within about 1 degree), so the local conditions should be pretty similar.

Anyway, what you can see is that the other stars do behave differently to 83 Leonis. If there was some systematic effect, 83 leonis's trace should follow the averaged traces. More importantly, the "dip" in the 83 Leonis trace is outside of the error bars for the other stars, suggesting that the dip in the trace for 83 Leonis is bigger than what one could expect from random variation.

So maybe, just maybe, this might be a real exoplanet detection. Or maybe I'm just chasing errors. After all, what I know about astrophotometery could be written on a postage stamp. So if anyone has good ideas for generating pseudo flat fields and darkframes from the STEREO images that a mathematically challenged biologist can understand, drop me a line.

Now I'm going to take a break. It's taken me a month to assemble the images, find freaking 83 Leonis (a post about that later) and do the photometery and analysis. Plus my sister-in-law and family are visiting. Catch you later.

I gratefully acknowledge the assistance and helpful discussion from Professor Glenn White of the Open University, Professor Greg Laughlin and Comet Al. Without these folks I wouldn't have known where to look or how to begin analyse my data.