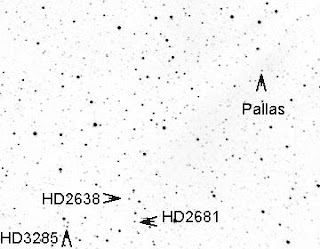 A couple of days ago I speculated that the SECCHI imagers of the STEREO space craft might be able to detect exoplanets. I was really excited by this idea, finding it hard to sleep as the thoughts bounced around my head. I had to try it and see.

The star I selected was HD2638. It is moderately bright (magnitude 9.38), has a period of 3.44 days, so several transits could be caught in the H1 imagers, the transits were long enough to get reasonable coverage with the H1 imaging schedule, the transit is reasonably deep (1.2% of the stars brightness) so there was a modest chance that the imager sensitivity would pick this up. 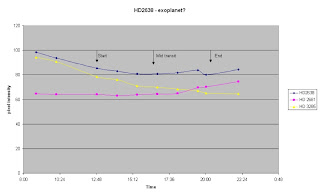 And best of all, HD2638 was in the field of view of the H1A camera in February, when the star was undergoing a series of transits.

With mounting excitement, I downloaded an image series that spanned a recent transit. This was frustrating as my internet connection is slow at the moment, and it took over a day to get all the images. Then I stacked, background subtracted, and registered the images in ImageJ, then went looking for HD2638.

This was not exactly straight forward, as the field of view images on the SECCHI site is not the actual field of view, the area H1A was looking at was devoid of obvious asterisms and the camera sensitivity means that image star brightness does not match the star magnitudes in SkyMap. But having the asteroid Pallas in the field of view helped. Eventually I tracked down HD2638, measured it's brightness in each frame using ImageJ (it inverted the image to black on white for easier analysis), downloaded them to a spreadsheet and graphed the result.

And got a transit like curve (click on the spreadsheet image above for a full scale version you can actually read). I was astonished, this all seemed to easy. Surely it should be harder than that? It was a bit suspicious, the "transit" was wider than the ephemeris predictio0n, and it seemed to deep. So I measured the intensity of a companion star, HD 2681, a 9.2 magnitude star nearby as a control.

But something didn't feel right, amongst other things, the HD2681 curve implied that HD2638 was getting dimmer when the transit was well and truly over. So I did another reference star, HD3285, a magnitude 9.3 star also close by ..... and got the same curve as for HD2638. It was all instrument artefact.

Of course, if I had done a surface plot (see the animation above), this would have been immediately obvious (handy tool that should have used it first). Notice most of the peaks decreasing then increasing. Either the H1A instruments sensitivity drifts significantly, or the way the star images drift over the pixels of the CCD chip mungs up their brightness, or the method I use for background subtraction is inappropriate. I think it might be still worth while having a mores serious look, possibly with a more deeply transiting star if I can find one (possibly HD192263, mag 7.7, 2% drop, but on the margin of being in the H1A instrument field of view). Or I could just ask the SECCHI people.

What do you think?

Comments:
Sorry - but when you look at all the data, and fold it on the radial velcity derived period, there is no trace of a transit signature - although the star is sufficiently weak that the depth would have to be more than a few percent! The full light curve is at:

Sorry - and no - we have not detected any exoplanets with STEREO - yet!

Carnival of Space #45 is here.
It's just like having your own cloud-free telescope
I'm Chuffed
Carnival of Space #44 is here.
Still more Venus-Moon images
Moon and Venus from New Zealand.
A Great Morning Lineup
How the Planets got their Names
Can Polaroid Sunglasses Help You See Venus in the ...
Martian Avalances Caught in the Act