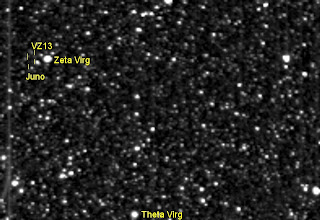 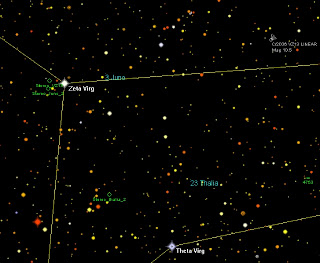 Comparison between a STEREO image (05-08-2007, 08:09 UT) and SkyMap chart. In the chart, the Earth Centric position of Asteroids Juno and Thalia and Comet VZ13 are shown, as well as the positions of these objects as seen from the Stereo spacecraft (yellow circles). In the Stereo image, major stars and the position of Juno and VZ13 are labeled. Click on images to enlarge.

A little while ago I was lamenting the problem of parallax and how it made locating dim asteroids and comet problematic when examining STEREO images for unknown comets. Because the spacecraft are substantially ahead or behind of Earth, asteroids, planets and comets will appear in different positions to those found on an Earth based ephemeris or chart. And the shift will be different for each object, so finding one is of limited help in finding others. I tried writing an Excel spreadsheet to calculate the parallax shift, but my limited maths meant that my spreadsheet sort of worked, but was substantially out for large parallax objects.

Then Rainer Kracht and Colin Drescher of Stereohunter pointed out that the JPL Horizons program will let you find the position of objects as seen from a number of solar system objects, including the stereo spacecraft. This is fantastic, and the answer to our parallax problems. You need to know that in the "Observer location" input field you type "@stereo-a" or "@stereo-b" and for the target input field for asteroids you type in the asteroid number (and comets you have to type slightly abbreviated names eg c/2006 VZ13).

Once you have that, the program comes back with a nice list of RA/DEC values. You can look them up manually in your planetarium program, or some programs, like the one I use (SkyMap) have a facility to input RA/DEC values and display them on the map (in SkyMap this is QuickCatalog). The resulting map looks like the chart above, where you can clearly see the offset between the Earth-centric positions and the objects as seen from STEREO-A.

You would think that with the parallax problem solved our problems are over. Well, not quite. I couldn't actually find Juno until I made the AVI, on the original images, even with animation, background noise confused me. And I still can't find Thalia, it's in the image and animation somewhere. But at least our lives are at lot simpler, thanks to Rainer and Colin.

The JPL Horizons program also has a email-based batch interface, when you have a number of objects the web based from is tedious, see the main Horizons page for details and instructions.

Venus and the Moon, Tuesday evening
Mars, Pleiades and Hyades
Science Alive! at Science Week
ISS and STS-118 in the morning
The 15th Carnival of Space Lifts Off
Farewell Venus for another Year
Mars Meets the ISS
And a really nice fireball...
ISS, Mars, Moon and the Pleaides on Tuesday Mornin...
A Birthday Competition for Ice In Space