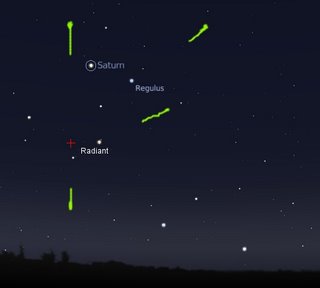 North-eastern horizon at around 4:00 am (daylight saving time, 3:00 am standard time) on the morning of Sunday, November 19 (click to enlarge). The red cross indicates the radiant, the apparent point of origin of the meteors, and the yellow lines give you an idea of where the meteors will go (they can actually first appear much further away from the radiant.

The Leonids are the iconic meteor shower due to spectacular displays in 1833, 1966, 2001 and 2002. They are due to dusty debris from Comet Tempel-Tuttle slamming into Earth's atmosphere. While occasional Leonid meteors can be seen most of November, the rate rises to a peak in mid-November.

This year the peak is on Sunday, 19th November, with estimates of between 100-120 ZHR (Zenithal Hourly Rate - the number of meteors you could expect to see if the radiant was at the Zenith under dark skies). Unfortunately, the peak occurs between 3:00 and 6:00 pm in Australia, when the Sun is high in sky. That combined with the fact that the radiant never climbs very high in Australian (and New Zealand) skies, means we could expect to see far fewer meteors. Somewhere in the range of one meteor every 4-5 minutes is likely. Also, this year the meteors are expected to be relatively faint, so dark skies are best.

However, despite the relatively low rates Australians can expect to see, there is the chance of seeing some outbursts. And the Leonids themselves are lovely, even with the very low rates seen in the 1999 shower in Australia (we saw 5 in one hour), those meteors were fantastic, bright fireballs stretching from horizon to horizon. Even though the average will be fainter this year, still expect to see some very nice meteors. Also, with Saturn glimmering near the Sickle of Leo, Orion the Hunter stretched out overhead, and the Pleiades nearby, the morning will be a beautiful sight anyway, without meteors. You might even see a satellite or two (but not the ISS or iridium flares). To check the weather forecast, go to the Meterology Departments forecast site, or alternately the Weather Channel.

Where to look: Face north-east. About five hand spans above the horizon you should see bright Saturn. A hand span to the right brings you to the bright white star Alpha Leonis, Regulus. Following down and to the left from Regulus you will see a number of fainter stars which form a sickle shape, the head of the lion. The radiant of the Leonid shower will be roughly in the center of the curve of the sickle, about one finger width up (see image above). However, the meteors can turn up almost anywhere in the eastern half of the sky, so make sure you have a spot with a fairly clear field of view, without any bright streetlights in the way. Use common sense in choosing a viewing site. Lone persons should not choose dark parks in the seedy part of town to watch the Leonids, as a mugging can ruin your entire day.

What do you need: For meteor watching, very little is needed. Basically, all you need is you. If you want to try and count the meteors, you will need a couple of sheets of paper, a pencil and a good watch. Bundle up against the predawn cold, warns shoes, thick socks, sensible pants and a good jumper and possibly a blanket to wrap yourself in (I really mean this, last time I had a jumper and a windproof and I was seriously cold). Bring a reclining chair if you have one, or just a picnic chair or a good picnic blanket, and find a dark site with a wide-open view of the sky. Then just lie back, relax, and look up at the stars. Optional extras are a torch with red cellophane over the business end (otherwise you ruin your night vision everytime you turn it on), and a thermos of something warm to drink. Mosquito repellent is also a very good idea.

Comments:
Hi Ian, Thanks a lot for the info on what will be a spectacular Lenoid display! The handy hints for maximising enjoyment, such as warm clothes and something to eat and drink (and keep the insects from assailing you of course!) were most welcome and the links you provided were veeery interesting! I saw a great photo of the Lenoids from Hong Kong taken in 2001!

It is ironic that at this time in just another day I will be preparing to go and view the Lenoid meteor shower! How exciting

Stumbled on your thread James and will drag my two girls out tomorrow morning early to give them a show. I'll let you know what they thought. Cheers

Apologies - just realised after reading the article, the blog is Ian's (not James'). My apologies to all.