Saturn, the Moon and the ISS, Monday and Tuesday Morning 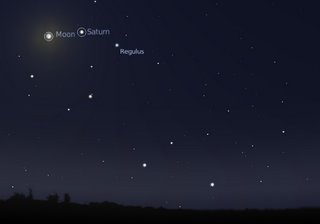 If you are a bit of an early bird, getting up early on Monday and Tuesday will reward you with the sight of Saturn and the Moon a handspan from each other, with Regulus nearby making a nice line.

On Monday The Moon will be to the left of Saturn, (as above) on Tuesday to the right.

As an added bonus, some of you may even see the ISS pass close to the Moon and Saturn.

In Adelaide, on Wednesday morning the ISS passes the Southern Cross at 4:30 am, and tails off not far from Leo, where our trio lie, on Tuesday, the ISS passes through Orion at 4:51 am and then comes close to the Moon and Saturn.

In Sydney, Melbourne and Brisbane, the ISS comes close to the Moon and Saturn on Monday morning, and on Tuesday they pass a bit further away from the Moon and Saturn, but still close enough for a pleasing view. ISS maximum altitude times are given below, but it is best to check your local circumstances with Heavens Above. The ISS also passes close to the Southern Cross and the Hyades (Brisbane only).