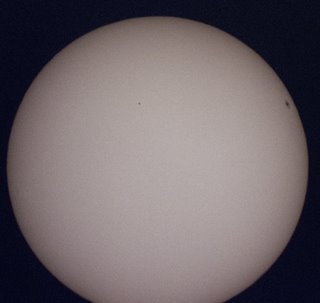 Transit at around 8:30am, click to enlarge. Mercury is the tiny dot roughly in the centre-top.

Okay, here it is, the promised transit roundup. I still don't have my other shots developed, but here is an animation of the first stages of the transit (0.9Mb 8:00 am-10:00 am). Mercury blobbles around a bit as I tried desperately to improve the focus. My elderly Pentax has a weird stipple screen focus, unlike the split screen I'm used to, and focusing on the Sun is a right pain. But enough about me, lets move on to some other images from around Australia and the World.

Tony Travaglia of Oamaru, New Zealand sent me these images of the transit at about 40 mins into the event. 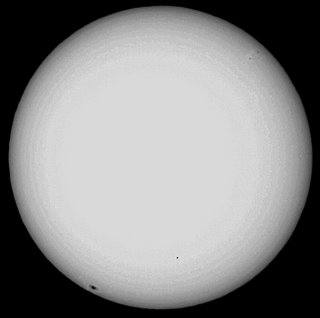 He used a 6 inch refractor (1200mm focal length), photographed with ISO 100 film, exposure 1/125 sec (what I should have used instead of 1/250) with a Canon 300D, the bottom image is enlarged shot that had a 10mm eyepiece attached. Aren't they just briliant shots? Many thanks to Tony for sharing these.

While we are on New Zealand, the the Wellington Astronomical Society has a number of rather cool images.

In Australia, we seem to have done very well with good weather in most places (except Sydney, sorry folks). The Ice In Space Solar System Forum was humming with activity. The Mercury Transit thread has some good pictures, as does this one, and here is a great Hydrogen Alpha image. Here is a great series of egress images from SA, and a heroic story with great pics from Brisbane. This post has a great series of animations in it. There are many more, so check the forums out. 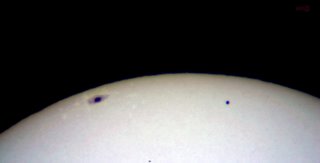 Astronomy WA has a good transit roundup site as well. The CSU remote telescope, about the only webcasting site that didn't crash, has a best of the Transit page.

What about the usual weblog suspects? Stuart in the UK couldn't see the transit, but posted a nice Mercury-Venus transit comparison, Tom was dudded by the weather, but caught a working webcast. Dirty Skies got some great shots under less than ideal cirumstances. A Voyage to Arcturus got some really nice ones as well. This is my favorite, just at ingress. The Bad Astronomer caught the transit, but his imaging system didn't work.

Elsewhere, in the Phillipines, this group caught egress with millisecond accurate timing. Ed Morana's Transit page is pretty spectacular too.

NASA/SOHO also have a Mercury Transit page. It is a little hard to find the MIDI pictures though. Try the SOHO Hot Shots version though. It has some great animations on it. Don't miss the EIT animation, where you can see Mercury outlined against the Solar corona. The Hinode transit page is pretty spectacular too. Also, Space Weather has a rather good transit photo gallery.

Sunspot 923 is BIG
Saturn, the Moon and the ISS, Monday and Tuesday M...
Birthday Train
Four planets gather
Shooting the Moon
Transit of Mercury Pictures
Semi-live Transit blogging
All go for Transit of Mercury Tomorrow Morning.
Last week in Astronomy (2)
Registax 4 is out!!!