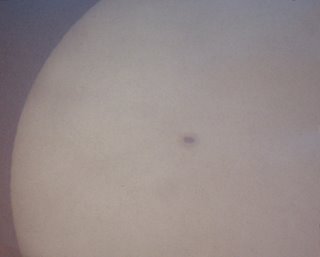 Sunspot 923, which was a mere blip during last weeks transit, is now nearly face on and revealed in all its glory. Around 5 times the size of Earth, it is easily visible with safe solar projection techniques. Even a simple pinhole projection system will reveal it.

Here I'm using my telescope projection system. Even though the autofocus of the digital camera doesn't like focusing on projected images, you can clearly see the spot and penumbra around it. (see the shot below from SOHO for comparison). Live it was much more like the SOHO image, you could even see the spot outliers.

This baby was firing off flares like crazy before it rotated onto the near side of the Sun. Aurora watchers are waiting with bated breath to see if it performs while facing us. 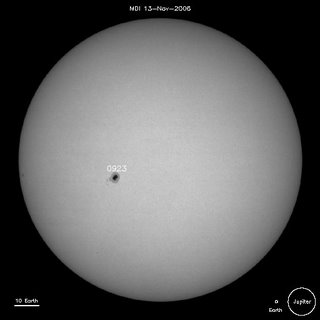 (Image Credit, NASA/SOHO) MiddleOne and SmallestOne came out to watch me. "SPOT SPOT" yells smallest one. "Dad", says MiddleOne, "if the Sun wasn't burning hot, and was made of rock, could we live on it?"

So simple a question, but how to answer. I chose to point out that gravity would be much, much stronger on a Sun sized rock, let alone all the other complications. So we had a "heavy gravity" walk back to the house to demonstrate.

Saturn, the Moon and the ISS, Monday and Tuesday M...
Birthday Train
Four planets gather
Shooting the Moon
Transit of Mercury Pictures
Semi-live Transit blogging
All go for Transit of Mercury Tomorrow Morning.
Last week in Astronomy (2)
Registax 4 is out!!!
2009 is the International Year of Astronomy