What was the Conjunction like from Jupiter (and Callisto and Ceres)?


A little while ago someone on Facebook (soory, I forgot who it was), said people on Jupiter and Venus would be wondering why we were making a fuss.

Well, Venus maybe, but from the cloud tops of Jupiter Venus and the Earth are even more spectacularly close. In a telescope (should you be in a convenient balloon, or be an inquisitive balloon organism) , the crescent Earth and the "last quarter" Venus look superb, with Earth's Moon nearby.

The most spectacular view is from Callisto though. You get to see Jupiter eclipse Venus, Earth and the Moon, and before that, you get to see the various Galilean moons dance towards and away from Venus and Earth. 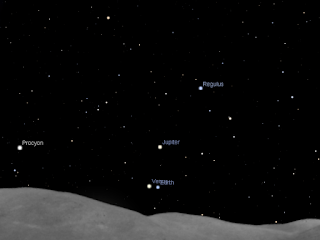 The view from Ceres is not quite as spectacular, but still very nice. Venus and Earth are close, but not spectacularly so, and Jupiter and Regulus form a line above them.

I'm sure there is some space rock between Earth and Ceres that is in the right spot to have a spectacular triple conjunction. I leave that as an exercise for the reader.