Tonight's view of the conjunction (well strictly post conjunction)  was brilliant, with amazingly clear skies. I was able to get some nice shots off in between organising dinner for the family (take-away chicken and chips, I am nothing f not a gourmand). The sky was gorgeous, the pair of Venus and Jupiter brilliant and close (Jupiter is the dimmer one closer to the horizon). 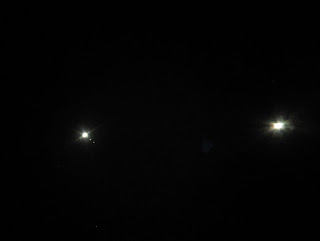 My image of Jupiter and Venus taken through the 114 mm Newtonian with 32 mm eyepiece and my Canon IXUS using infinity to infinity focusing (400 ASA, 1 second exposure).

Everything is over exposed as I can't go below 1 second exposure, and being an idiot I did not dial down the ASA rating (hits self on forehead).

In the eyepeice the crescent shape of Venus and the bands of Jupiter were clear. The pair also fitted into the  25 mm eyepiece FOV, but given the drift rate, I did not image them at the higher magnification. The 8" has a time drive, but with the cold and having to run in and out organising  dinner the hassle of dragging it out and setting it up just didn't appeal.


But still, I saw it, and it was terrific! The show is still not over. Over the next few nights the pair will draw apart, and on the 18th and 19th they are joined by the thin crescent Moon.