The Last Quarter Moon is Thursday July 9. Venus is prominent in the twilight evening sky with bright Jupiter very close by. The pair separate over the week. Saturn is in the head of the Scorpion and is easily visible in the evening. Mercury is below the bright star Aldebaran in the morning.

The Last Quarter Moon is Thursday July 9. The Moon is at perigee (when it is closest to the earth) on the 6th, and Earth is at aphelion, when it is furthest from the Sun, on the 7th. 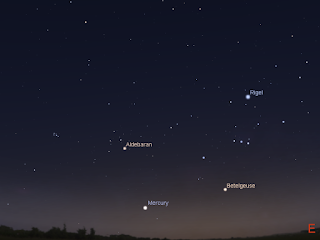 Early morning sky on Saturday July 4 looking east as seen from Adelaide at 6:30 ACST showing Mercury below the Hyades and the bright star Aldebaran. The pair are just  above the horizon. Similar views will be seen elsewhere in Australia at the equivalent local time.  (click to embiggen).

Mercury is high in the morning skies at the begining of this week and sinks back towards the horizon. 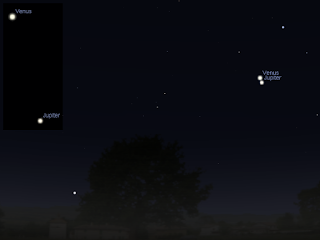 Early evening sky on Thursday July 1 looking north-west as seen from Adelaide at 18:30 ACST showing Venus and  Jupiter close together. The inset shows the binocular view of the two at this time.

Venus is easy to see above the western horizon in the twilight. At nautical twilight, an hour after sunset, it is around two hand-spans above the horizon, and still visible at astronomical twilight. Venus is a distinct crescent shape in even small telescopes.


Venus and Jupiter start the week very close, around a Moon diameter apart, as the week goes on they move away from each other, with Jupiter sinking towards the horizon, but will be an excellent sight for quite some time.

Jupiter  is easily seen  in the early evening sky near Venus in the north-western sky. It is between the bright star Regulus in the sickle of Leo (this forms the head of the constellation of the  Lion) and Pollux in Cancer. It is also not far from the rather nice Beehive cluster in Cancer, and looks very good in binoculars. Jupiter and Venus are close at the start of the week, and move further apart as the week goes on.  (see Venus description above).

Jupiter is visible in the early evening, setting just after 8:30 pm, and is high enough for telescopic observation once twilight is over. Jupiter's Moons will be putting on a good display in both binoculars and small telescopes. 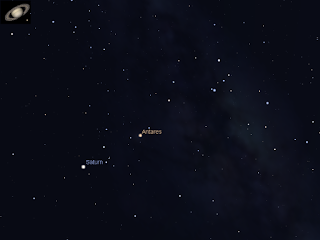 Evening sky on Saturday July 4 looking north as seen from Adelaide at 22:00 ACST.  Saturn is  easily visible high above the northern horizon near the head of the Scorpion. The inset shows the telescopic view of Saturn at this time. Similar views will be seen elsewhere in Australia at the equivalent local time. (click to embiggen).