The ISS passed quite close the pair of Jupiter and Venus tonight as seen from Adelaide, the cloud got in the way a bit, but it was still brilliant to see the ISS zip past the pair while planes flew by. (Hat tip to Paul Curnow for the heads up). 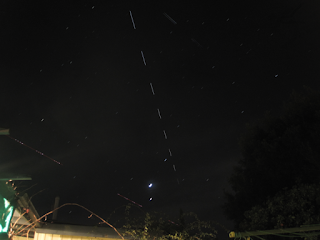 Jupiter, Venus and the ISS at 18:48-18:49 ACST, stack of 8 x 5 second exposures at 400 ASA (two planes also caught). Images stacked in ImageJ, the images ren't registered on the stars as in the Deep Sky Stacker image, but the two frames DSS dropped are included.

There are a number of bright passes of the ISS this week, but only on 7th and the 9th are they reasonably close to Venus and Jupiter (as seen from Adelaide and Melbourne).

Check out Heavens Above for predictions for your local site.

Comments:
I saw it down in busselton, was looking up at the sky and saw three bright lights in a vertical line which I thought was cool. Then one diverged and flew straight over me ...really didn't have a clue what it was ...but looked pretty amazing ...phil

It was pretty cool. Clouds cleared just at the prefect time. Even gave me chance to give some astronomy tips and stars to neighbors. ��

We saw it here in Mosman, Sydney, Australia at 5.31pm and thought it was great. Took a few pictures and it then went overhead and in to the clouds. All good fun. Anonymous!!

Too far north in Brisbane unfortunately. I couldn't make head nor tail of that predictive site you linked to.