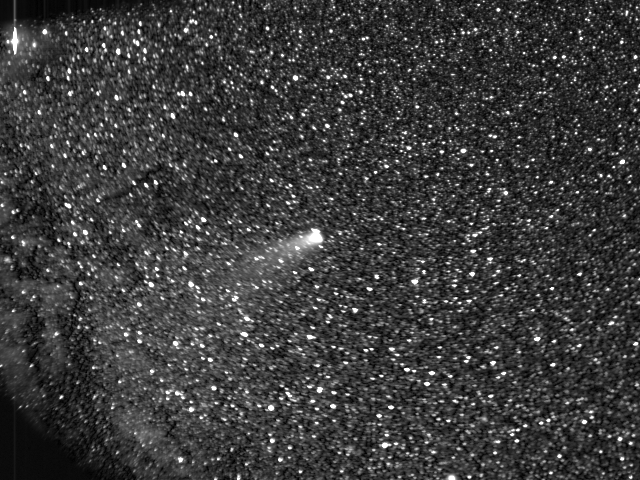 While all eyes have been on C/2011 L4 PanSTARRS (and rightly so, while small it has been magnificent), comet C/2012 F6 Lemmon has been quietly chugging away in the background.

While C/2011 L4 PanSTARRS has had it's moment in the STEREO imagers, Lemmon has not, until yet.

On April 17 the comet began to enter the field of view of the H2A camera, and is crossing the bottom half of the camera quite nicely. It's a bit hard to see in the image above, where I have boosted the brightness a bit to bring out the tail, but the comet has quite a long and dynamic tail.

For the animation below I stacked 29 images from 17 April to 19 April in ImageJ, then inverted the image and tried to maximise the brightness and contrast to get the tail  as visible as possible. The stack was then exported as an AVI. While not the best, if you look closely you can see some tail dynamics.

Carnival of Space #297 and #298 are Here!
Kepler-62 and Kepler-69, a Bonanza of Exoplanets i...
Partial Lunar Eclipse April 26, 2013
Chocolate Marylin Munro
Want to see comet ISON at its Brightest? Practise ...
The 2013 Lyrid Meteors, neither rare nor spectacular
The Sky This Week - Thursday April 18 to Thursday ...
A Lawn Mowing Robot
ASCSA: Stargazing Night at the Heights Observatory...
Adelaide: Free Public Lecture from ESA Astronaut W...