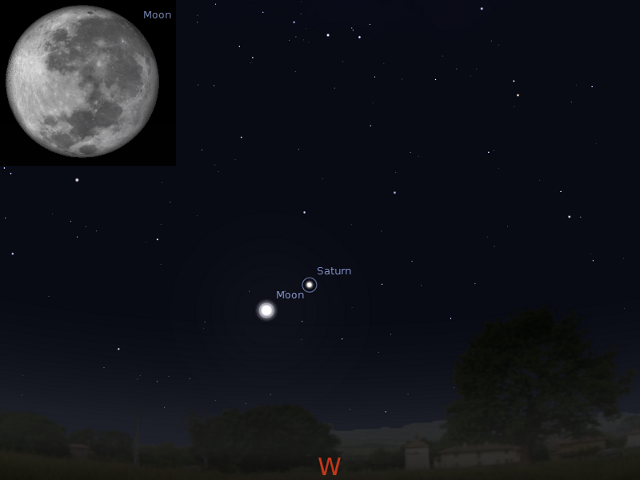 Western horizon as seen from Adelaide at 5:30 am ACST on April 26. The Moon is near mid-eclipse at this time. The illustration makes it look worse than it will be, there will be a definite dark "chip" seen at the Moon's south pole, and the southern half of the Moon will be subtly darker than the North.

On the early morning of 26 April there there be a partial eclipse of the Moon. This is a very poor eclipse, with only a small bite take out of the Moon's northern edge. It is still worth getting up for though.

WA has the best view, while the east coast sees the eclipse in various stages of twilight, and may be quite difficult to see.

Comments:
Hey Ian, where do we write to complain about Google's Earthy Day animation - it has the moon in all phases rising as the Sun goes down - well when I say all phases, it skips the night of the New Moon and because of this timing it looks like the Moon is somehow lit by the Sun on the opposite side of the Sun.

Well, I guess I can write it here !
It annoys b=me as much as smartphone OSs that use the Moon to indicate night time, when you can see the Moon in the day - of course only if you actually look !

Seriously, I have no idea. They don't have a contact on their page?

I think that will have more effect than a complaint via the web page.