The 2013 Lyrid Meteors, neither rare nor spectacular 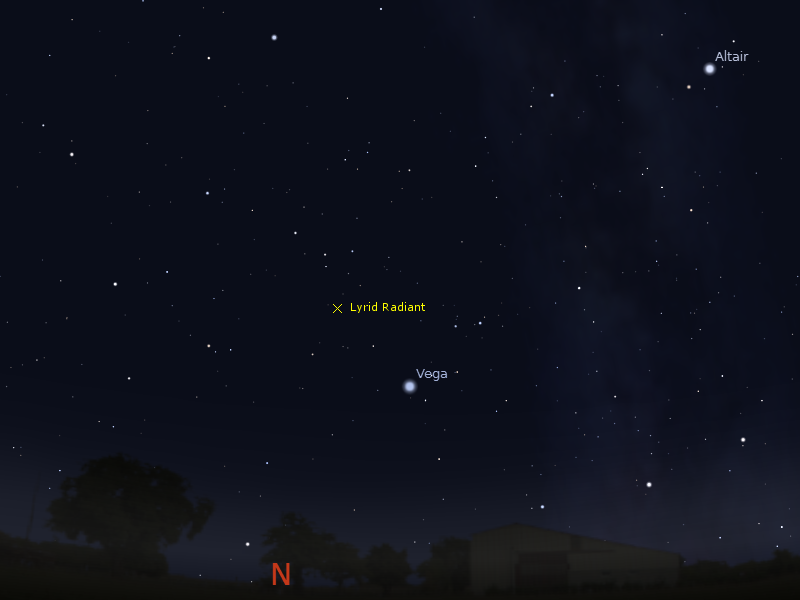 The morning sky looking north as seen from Adelaide at 4:00 am ACST on April 23. The Lyrid radiant is marked with a yellow cross. Similar views will be seen elsewhere at an equivalent local time (click to embiggen).

There's a series of posts running around Facebook at the moment claiming variously that on the night of 22 April we will have the chance to see "one of the rarest meteor showers" and that during the night "meteors will fall like rain" or "you will be able to see thousands of these falling stars" (ironically, sometimes these statements are sometimes given above the true meteor rate).

These Facebook posts are of course not true. The meteor shower the Facebook posts refer to is the Lyrids, debris of comet C/1861 G1 (Thatcher).  The Lyrids are not rare, they are a reliable shower that occurs every year between April 16- April 25, with the peak this year between 4-15 hrs UT on April 22 (that's between 2pm -April 22 to 1 am 23 April in east coast Australia, but as the radiant doesn't rise until 1 am, the best time to view the Lyrids in Australia is from 4 am on the 23rd).

The Lyrids will not produce "thousands of falling stars". The predicted ZHR this year is 18 meteors per hour. This means that under ideal conditions, you will see a meteor on average about once every three minutes. This can be as interesting as watching paint dry. Also, while that meteor every three minutes is the average, meteors are like buses, you wait for ages and then a whole bunch turn up.

The rate is actually less than the ZHR., ZHR means Zenithal Hourly Rate, the number of meteors you could expect to see if the radiant (the apparent position where the meteors originate) was at the highest point of the sky, under dark sky conditions.

Of course under real conditions the Lyrids radiant will not rise that high for most places, and most places won't have really dark skies. The lower the radaint is, the thicker atmosphere will obscure the fainter meteors, and some of the meteors will start to "burn" below the horizon, so over all you will see fewer.

This is particularly true in Australia, where the radiant is very low to the horizon. In Australia the radiant rises about 1 am local time, but it is not really high enough for there to be any real chance of seeing meteors until around 4 am, when the radiant is between three handspans to four handspans above the horizon (see diagram above). From Australia, at 4 am, under dark sky conditions, we will see between 4 meteors per hour (southern states) to 6 meteors per hour (Northern Territory and QLD).

That's not "meteors falling like rain" (okay, the Lyrids do have occasional outbursts, but the last outburst that was so spectacular was in 1803).

The other factor is the nearly full Moon. This isn't much of an issue in Australia, as the Moon sets before the radiant gets high enough to see any decent number of meteors. But in the northern hemisphere you will need to wait until morning to see a decent number of Lyrids as the Moon washes them out. 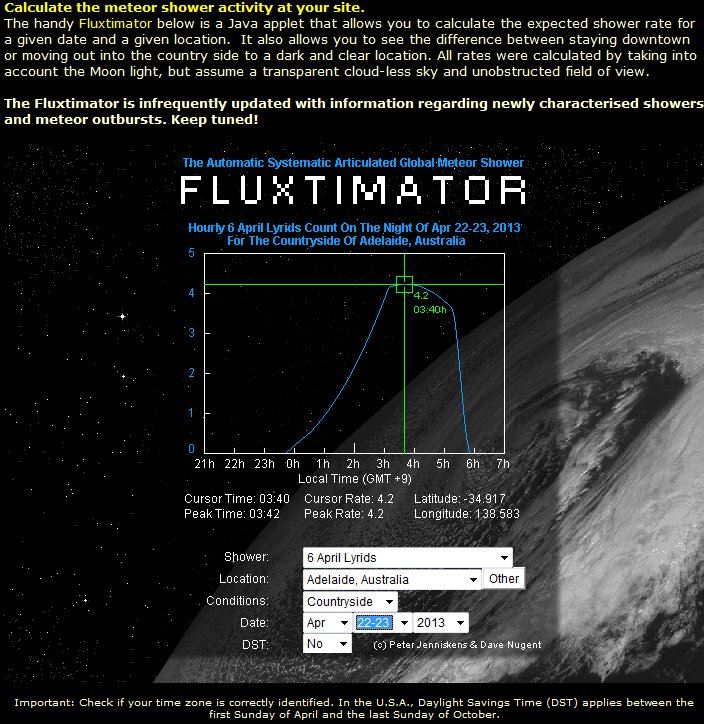 If you want to see what the rates will be like at your area, try the Meteor Flux Estimator.

Choose 6. April Lyrids from the drop down meteor shower Menu, the date (make sure that you set the year to 2013, and your location, most people will have to put in their latitude and longitude (strangely, Adelaide, Brisbane, Darwin and Perth are listed in the drop down menu, but Sydney, Melbourne and Hobart are not) under "other" in the location box.

The Lyrids won't see meteors falling like rain, but they are a nice reliable shower with some bright meteors, you won't see many, but if you are patient and in the northern hemisphere, you will see some nice ones.