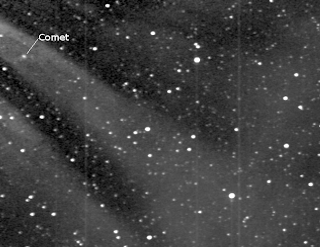 Comet C/2003 T12 enters the field of view of the STEREO H1B imager on 16-01-2012. Image processed with ImageJ from raw images from SECCHI/STEREO. An animation is at the end of this post.

While my internet was in abeyance, a remarkable story played out in the STEREOHUNTER community.

Comet Al noticed a reasonably bright comet coming out from the Sun and alerted the group, William Thompson back tracked it in the COR2B images.

An orbit was initially worked out by Man-To Hui from the H1B images and Ranier Kracht refined them with the COR2B images, then found that the comets orbit matched that of C/2003 T12 (SOHO-673 observed in C3).

I love this group, the guys are backtracking now to see if they can pick it up in earlier appearances in STEREO, Comet Al may have picked up the 2007 return.

Anyway, the comet will soon be appearing in the evening sky (from about the 26th on it should be high enough above the horizon at astronomical twilight), how bright it will be is a matter of speculation. It might be unaided eye visible, or binocular only (or more likely telescope only). I'll be out having a look as I have the ocean as my western horizon.

If you want to look, Ranier's orbital elements are below: 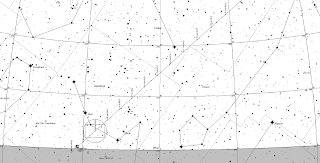 A chart suitable for printing (click to embiggen) showing the track of the comet over the next few days as seen at astronomical twilight in southern Australia. The chart shows the western horizon and the rectangle the field of view of the iTelescope T12 and 14 instruments.

Comments:
Have you seen the new apps that allow you to identify stars and their locations. I think it might be cool for this kinda stuff.

Hello Ian,
I do not know where to put the article, forgive me if I do it here.
Can you give me your opinion as soon as you can?
thanks always