The New Moon is Monday January 23. Venus is easily visible in the western evening sky and is visited by the Moon on the 26th. Jupiter dominates the evening sky in the north-west once Venus has set. Mars enetrs the evening sky, but is best visible in the morning sky heading towards Saturn, which is near the star Spica. Globe at Night Light Pollution Survey now on. 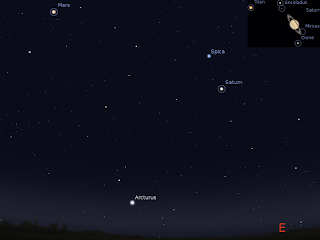 Morning sky looking east as seen from Adelaide at 3:00 am local daylight saving time on Sunday January 22 showing Mars and Saturn. The inset Similar views will be seen elsewhere at the equivalent local time. The inset shows the appearance of Saturn and it's Moons at this time. Click to embiggen.

Saturn is above the north- eastern horizon, not far from the bright star Spica. Saturn is now high enough in sky in the early morning for telescopic observation. 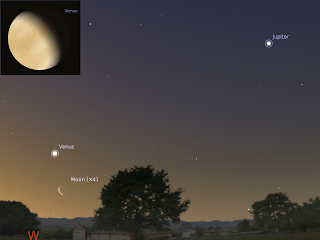 Evening sky on Saturday January 26 looking west as seen from Adelaide at 9:00 pm local daylight saving time in South Australia showing Venus in Aquarius, with the crescent Moon below and Jupiter not far away. The iset shows the appearance of Venus at this time. Similar views will be seen elsewhere at the equivalent local time (click to embiggen)

Bright white Venus is readily visible in the evening western twilight sky from around half an hour after sunset for somewhat over an hour and a half. Venus is in Aquarius this week. It passes lambda Aquarii (magnitude 3.8) on the 23rd and 24th. You will have to wait until quite late in the twilight to see this star appear.

However, Jupiter is still a great binocular and telescope object and will be for many weeks to come. Jupiter is visible for most of the night in the north-western sky, setting half an hour after midnight. 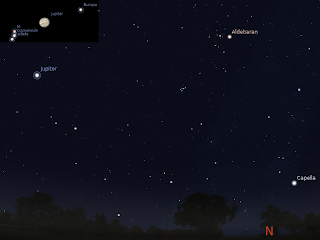 Evening sky on Saturday January 21 looking north as seen from Adelaide at 10:00 pm local daylight saving time in South Australia showing Jupiter and the waxing Moon. Similar views will be seen elsewhere at the equivalent local time. INSET: Jupiter and its Moons as seen telescopically at this time, (click to embiggen)

In the evening Jupiter is readily visible in the northern sky, from about twilight, and the north-western sky when it is fully dark.

Comet Lovejoy will be very difficult to spot as it has faded significantly, you need very serious telescopic kit to see it now..

What Can We Learn from the Fake HMO Image Incident...
Phobs Grunt has Come Down
Phobos Grunt Updated Predictions
Phobos Grunt comes Down this Weekend
Southern Skywatch January 2012 Edition Up
In Which I (Fail to) Discover Nibiru: Or Fakery is...
Comet 49P amongst the Galaxies
Possible Supernova in NGC 3239 in Leo
Comet C/2010 G2 Hill in STEREO
The Sky This Week - Thursday January 12 to Thursda...