In Which I (Fail to) Discover Nibiru: Or Fakery is Flattery

This image, which is claimed to show the mythical planet Nibiru (or HMO, for Heavy Mass Object), started doing the rounds recently. I became aware of it yesterday, in a Facebook post and briefly pointed out why it had to be a fake.
The purported object is a crescent, yet is supposed to be outside of Earth's orbit, it is impossible for any object outside of Earth's orbit to be a crescent. To be a crescent, the object must be nearly between us and the Sun (try this out with a torch and two tennis balls to confirm it for yourself).
Also, the crescent image has been Photo-shopped in, you can see a difference between the resolution of the object and that of the stars.
But what I hadn't realised is that the image that was Photo-shopped was one of mine. 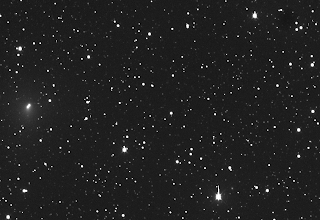 This image is the result of a stack of 4 x 90 second images of 103P in Andromeda, near the faint he galaxy PGC 71451. Images taken with GRAS 05 on 18-09-2010 stacked and summed on the stars using ImageJ (click to on the image embiggen). The original image is here .
I paid no more attention to the thread (playing with my nephews and watching Startrek had a higher priority than debunking alleged Niburu sightings). However, while I was sleeping, folks in the US were tracking down the the image.
Francis Walsh noticed that the image didn't look like images of 89 Leo he had taken (you can use wikisky to compare the image to the region around 89 Leo and the image), and Messierhunter noticed the fuzzy object to the left was a comet, a comet he had imaged called 103P, he then tracked down to image, which turned out to be one of mine.
Tbar1984 then created a video pointing out the fake. All while I was peacefully sleeping.

Side by side comparison of my image from 18-09-2010 (right panel) and the image allegedly taken on 09-01-2012 (left panel. Click to embiggen.
This is a side by side comparison of the two images, the one allegedly taken on 9-01-2012 and mine taken on 18-09-2012. you can see that they are identical. Comet 103P is the killer, comet 103P is not near Leo in 2012, and infact is too dim now (around magnitude 19), to be imaged in all but the most serious iTelescope research scopes, and this image is clearly taken with GRAS05 (the scaling and intensity of the stars is the clue, GRAS 11 now T11, for example, has a very different scaling and photometric response).
It's painful listening to Don Adams try and pretend it is not a fake (especially when he points to what are clearly stars and calls them ships). Folks, you just can't randomly point to a few stars and claim a match, lots of stars will form tetrahedron like alignments, you have to do precise astrometry. What you should do is use Overlay with Difference setting in Photoshop/GIMP to see if the stars align properly.
I have no idea who faked the image by Photo-shopping my original (Don Adams says it came from a "trusted source"), but I suppose I should be flattered that they chose my image as a good example of GRAS imagery. Validates me as an astrophotographer it does.
Apparently rumours are circulating on the web that I have faked MY image, taking the image and blocking out the alleged object. Unfortunately for them, I have the original images and FITS (also, I'm not that good a photoshopper to be able to remove the text from the alleged image without removing the stars the text overlies).
Should be interesting to see what develops over the next few days, but I have no illusions that the Nibiru fans will be dissuaded by mere evidence.
UPDATE: hat tip to Scott Ferguson, who emailed me last night, but I completely ignored the intertubes last night.

Comments:
Clearly who ever it was has been playing with The Pea Life experiment. 8)

So glad to have access to your blog! I was one of the masses taken in on the whole Elenin/Nibiru scare last year...fortunately found your twitter account as well as AsteroidWatch and SungrazerComets and have since educated myself. The good thing to come out of it was a renewed interest in astronomical happenings and the ultimate antithesis to Elenin - Lovejoy! The bad...being abused on sites such as Richard C Hoagland's for daring to question their science. A small price to pay for rationality to win out. :)

Comet Al: Ha! (and now they are moving the southern itelescopes to Siding Spring, so we might have a chance to image Lovejoy next week or so)

Taisha B: Thanks! And more power to you. You just have to remain clam and let the nonsense slide over you.

Hello Ian...I will be rebutting this article..I believe that this image is not photoshop'ed. I would love to see the real image because I have specific questions that need to be answered..WE SHALL SEE :) you have my email..Let's talk...

"It's painful listening to Don Adams try and pretend it is not a fake (especially when he points to what are clearly stars and calls them ships)."

I'm familiar with the sensation. Not so long ago he claimed that Stellarium showed Nibiru as "black dot" near the Sun on 24 December 2011. The video where he repeatedly asserted that if it's not labelled, it's not the Moon, is especially funny:
http://www.youtube.com/watch?v=J3SytuiNMEc
(That is, if you can stop your brain from liquifying when you hear "NOT LABELLED!" for the n-th time.)

This guy is either really stupid, or really dishonest.

Thanks for the kind words folks.

Daggers Stab, maybe we could form a support group, Astronomers Annoyed by Donny, listening to him imbue hot pixels with dark significance has the same fascination as watching a car crash, it's horrible, but you can't stop watching.