The Last Quarter Moon is Monday January 16. Venus is easily visible in the western evening sky. Jupiter dominates the evening sky in the north-west once Venus has set. Mars is visible in the morning sky heading towards Saturn, which is near the star Spica. The waning Moon is near Mars on the 13th and 14th and near Saturn on the 17th. Mercury is lost in the morning twilight. 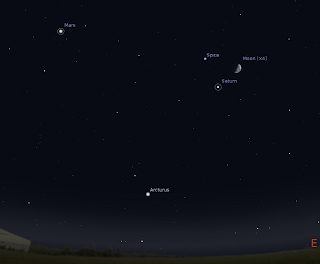 Morning sky looking east as seen from Adelaide at 5:00 am local daylight saving time on Tuesday January 17 showing Mars, Saturn and Mercury. Similar views will be seen elsewhere at the equivalent local time. Click to embiggen.

Saturn is above the north- eastern horizon, not far from the bright star Spica. On Tuesday the 17th, Saturn, Spica and the waning Moon are close together, making an attractive triangle. 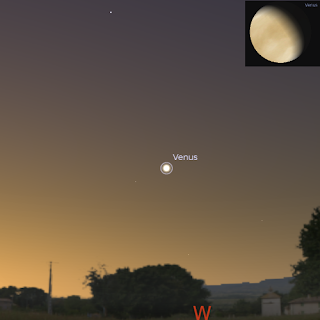 Bright white Venus is readily visible in the evening western twilight sky from around half an hour after sunset for somewhat over an hour and a half. Venus leaves Capricornius this week, entering Aquarius. It passes iota Aquarii (magnitude 4.8) on the 12th. You will have to wait until quite late in the twilight to see these stars appear.

However, Jupiter is still a great binocular and telescope object and will be for many weeks to come. Jupiter is visible for most of the night in the north-western sky, setting half an hour after midnight. 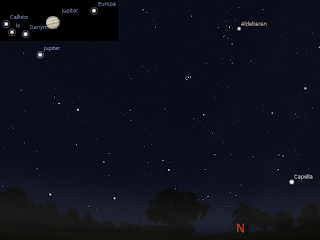 Evening sky on Saturday January 14 looking north as seen from Adelaide at 10:00 pm local daylight saving time in South Australia showing Jupiter and the waxing Moon. Similar views will be seen elsewhere at the equivalent local time. INSET: Jupiter and its Moons as seen telescopically at this time, (click to embiggen)

In the evening Jupiter is readily visible in the northern sky, from about twilight, and the north-western sky when it is fully dark.

Comet Lovejoy will be very difficult to spot due to the Moonlight until next week.