Supernova sn2011dh in M51 is brightening! 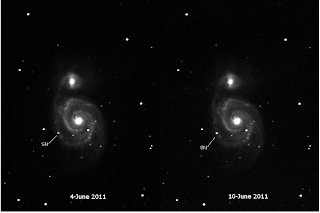 Most of you following this blog, or astronomy news in general, will be aware of the “bright” supernova in the Whirlpool Galaxy (M51).

I’ve been following the supernova over the past week (and encouraging others who are doing this to submit their images for crowd sourcing). After the first two images I tried my hand at photometry, to estimate the brightness of the supernova. 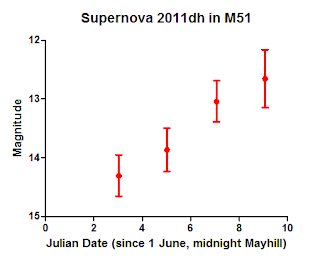 My first two images were from 4 June and 6 June (due to this thing called weather). I used spot densities from the calibrated (but otherwise untouched) FITS files derived using ImageJ. I used the densities from the supernova and 6 reference stars spanning the range of M13 to M15.1.

To my surprise, the supernova hadn't faded according to my data, but actually brightened. Given the accuracy of my measurements though, it could have just not have dimmed much.

So when I looked at my next image from the 8th, it looked as bright as the nearby reference star, and my photometry confirmed this. 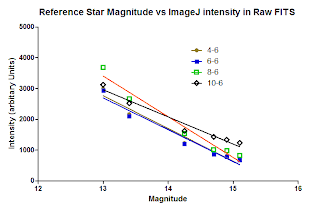 Then the image of the 10th the supernova was definitely brighter than the reference star (see image above). My photometry showed it to be M12.7.

were what I had magnitudes for) and I'm using spot densities rather than areas as is standard.

I was only moderately confident in the accuracy of the magnitudes. So I checked the sn2011dh webpage, and to my surprise found that my magnitudes fitted very closely with the magnitudes reported by others. The supernova's magnitude has now plateaued around M 12.8 (which is pretty typical of Type II-P supernova, although how typical the upward bump is I don't know).

This is definitely a supernova worth continued following (now I find I should have been doing exposures with BVR filters). Again I urge people to submit their images (details here). Calibrated but otherwise unmodifed FITS images are best, but all images are welcome. Of course, with the Moon almsot full imaging will have to take a break for a while, but when we have some less Moon-haunted skies it will be interesting to see what this supernova will be doing.

Comments:
Excellent work! you are very lucky to have good sky conditions long enough for this kind of measurements. I got a picture a few days ago but didn't got the chance to follow up, because of the weather.

There is also a start class article on Wikipedia about SN 2011dh. It seems to be acting like a Type IIb event.

Kevin: Ta! I completely missed the IIb possibility, but the second hump is consistent with that.

That sounds great, nice work! Hope to image this myself as soon as the weather cooperates.

Well done! I was out last night looking for it, sure not to find it in my 10" reflector, and instead there it was, incredibly the brightest star around that area. I had first seen it on the 8th at approximately magnitude 14, so I didn't expect it to be visible now. What a treat, and thanks for confirming what I saw.
Antonino Carnevali.