What is that Dot Below Saturn? (A problem with Android and iPad Skymaps) 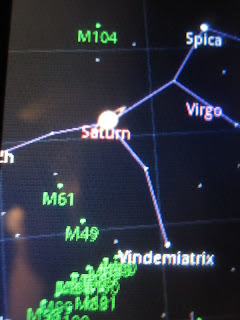 Google Sky on an Android Phone, the bitmap of Saturn covers gamma Virginis

So my brother rings me up and asks me "What is that dot below Saturn"? He and a mate were entranced by a small bright star below Saturn, but couldn't find it on their Android SkyMap application.

The star is Porrima, gamma Virginis. Having watched Saturn draw closer to this star over the weeks (in the rare break in the clouds) I'm in a pretty good position to identify it. The problem is that Porrima is so close to Saturn that the bitmaps most mobile apps use to represent Saturn overlap the image of Porrima.

This is particularly acute with mobile apps, where screen space is limited, but even on big screen programs its an issue. See the image from Stellarium below. You will have to click on the image to embiggen it, but even then Porrima is a tiny bump the side of Saturn. And the same goes with visualisation in SkyMap (no not Google SkyMap, the original). 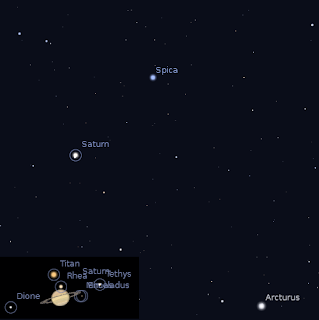 Evening sky on Saturday June looking north as seen from Adelaide at 9:00 pm local time in South Australia on June 4 showing Saturn near Spica and very close to Porrima (gamma Virginis). Similar views would have be seen elsewhere at the equivalent local time (click to embiggen).

And it wil get closer. By June 9 Porrima will be only 15', a quarter of a finger-width, from Saturn. That's pretty close, and you will have to zoom in on your planetarium programs to see them separated on screen.

After we identified Porrima (brother was fascinated by its pronunciation. we had an amusing interlude where I tried to direct him to Spica from a distance of 1,800 Km away, not knowing what his sky orientation was. We got there in the end.

Comments:
Is this that grouping of a not so bright star and a yellowish star that I can't recall noticing before ?
I sort of doubt it because I 've seen it fo a week and Saturn would move more than that.

No, Saturn is moving quite slowly, and it has been near Porrima for some while.

Thanks Ian, when I've been outside talking to colleagues at their home time, I've been distracted by that grouping and wondering why I haven't seen it before !
4 of them were outside today and didn't notice the ISS at -2.7. They didn't even look up.
I guess coming from inner Sydney and working in Lake Macquarie during the week, I appreciate having darker skies.

Crowdsourcing the M51 Supernova (and My Images)
At the Climate Change Rally
Carnival of Space #200 is here.
Supernova in M51
Comet Elenin is NOT a satellite of a Brown Dwarf Star
Southern Skywatch June 2011 Edition Up
Line-Up at Last (01-06-11)
The Things You See ....
The Sky This Week - Thursday June 2 to Thursday Ju...
Aurora in Tasmania