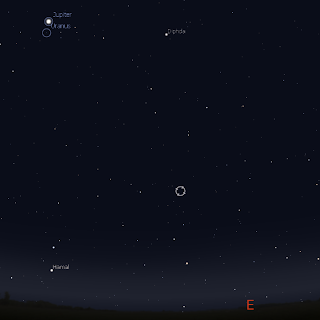 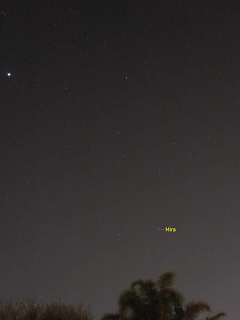 Left hand image, eastern horizon as seen from Adelaide around 10:00 pm ACDST, similar views will be seen elsewhere in Australia at the same local time.

Right hand image, photo of Cetus taken from my backyard at around 10:00 pm ACDST, Mira is indicated (Cannon IXUS, 15 seconds at ASA 400). Click to embiggen both.around

Mira is a pulsating Red Giant star that ranges in brightness from under unaided eye visibility to
around magnitude 3-4 in just under a year. This year we were expecting Mira to be around Magnitude 3.7 in late October, but Sky and telescope is reporting that people have been seeing it as bright as magnitude 3.1 already! Mira is fairly low in the sky at reasonable hours, but a few days ago I could confirm that it was bright, at least brighter than magnitude 3.5, but better estimates weren't possible because of light pollution. You can find Mira yourself using the spoter chart above, it's in the smae part of the sky Jupiter, so locating it should be easy. 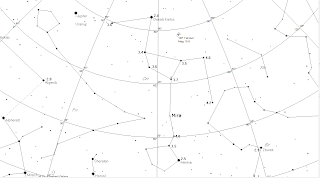 Magnitude chart for estimating the brightness of Mira.

You can have a go at working out how bright Mira is yourself. On this chart I've indicated the magnitude of several comparison stars. You will have to wait until Mira is high enough above the horizon for horizon murk not to interfere (around 11 pm at the moment). Then compare Mira to the reference stars. If it is brighter than the 3.8 star, but dimmer than the 3.5 star, it's magnitude is around 3.6-3.7.

Practice a bit, and keep a record as it nears maximum in late October, then dims again.

Carnival of Space #173 is here.
Animations of the 2010 TD54 flyby
Yes, You Can Follow Me on Twiltter
Well, what did you think happened?
Celestia File for 2010 TD54
A Small Rock Pays a Brief Visit
The Sky This Week - Thursday October 14 to Thursda...
Star GRASing and some Good News!
Captured! An Iridium Flare and Jupiter
Where is Comet 103P/Hartley Now?