A Busy Day at Jupiter 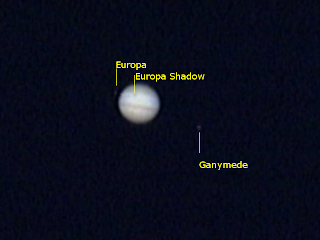 Jupiter in the early hours of 21 October, just after Europa has exited the face of the planet. Europa's Shadow can still be seen (click to embiggen)

The night of Wednesday October 20 was a busy one, Chez Reynella went to a meeting were we hear the first about the EPA report that would cause a storm in the media and parliament.

Then when we got home there was a multi-satellite event on Jupiter. With Io passing behind Jupiter, Europa doing a shadow transit of Jupiter and Ganymede coming out from behind Jupiter's shadow.

In the video you can see all of this happening. I took images at 10 minute intervals so I have a sequence of 16 images. Unfortunately, it was a warm night. Why do I say unfortunately? Because the seeing was terrible with atmospheric turbulence bouncing the image all over the place. Even at midnight it was still wobbly.

Each individual frame was derived from a 20 second AVI taken with my Philips ToUCam webcam, which was subsequently stacked using Registax5 with mild wavelet adjustment. So I got some detail. The Moons are somewhat distorted, but you can clearly see the shadow of Europa and Ganymede popping out of eclipse is quite dramatic. You can download a 14 meg AVI or a 2 meg GIF animation for your viewing pleasure.