The First Quarter Moon is Thursday, July 7, the Full Moon is Thursday July 14. This is a Perigee Full Moon, the best this year. Four bright classical planets in a line in the morning sky, Saturn, Jupiter, Mars and Venus. 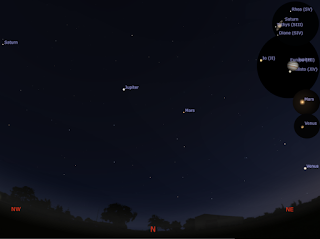 Morning sky on Saturday July 9 as seen from Adelaide at 6:24 am ACST (60 minutes before sunrise).

The five bright classical planets are visible in a line in the morning sky, Saturn, Jupiter, Mars, Venus, and Mercury. (Uranus, Neptune and the Asteroid Vesta are in the line too, but all need at least binoculars to see).

The insets are the telescopic views of the planets at the same magnification at this time, Europa is behind Jupiter and Callisto is skimming Jupiter's Pole. 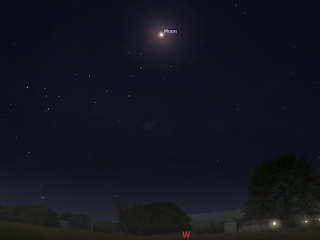 Morning sky on Thursday July 14 as seen from Adelaide at 4:07 am ACST (time of exact Full Moon). The Moon is just above the handle of the teapot of Sagittarius.

Perigee was on July 13, 10:00, 9 hours before exact full Moon, the closest paring of perigee and Full Moon this year. 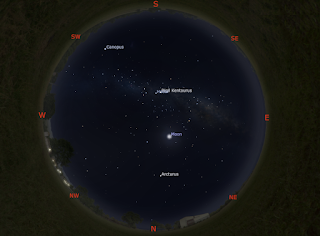 Whole sky on Saturday, July 9, 18:49 ACST, 90 minutes after sunset (click to embiggen). The Milky Way stretches across the mid-sky and the centre of the galaxy is coming into view.

Scorpius is prominent above the South Eastern horizon with the teapot a Sagittarius below. From the Sting of the Scorpion through the teapot there is a wealth of binocular objects to discover. However, the waxing Moon makes them more difficult to see. The following day (Sunday) the Moon is in the head of Scorpius.

Between the bright star Canopus and the Southern Cross are another wealth of binocular objects to discover.

Mars forms a line with Saturn, Jupiter, and Venus (and Uranus and Neptune).