The Last Quarter Moon is Tuesday, June 21. The Earth is at solstice, when the day is shortest, on the21st. The five bright classical planets are visible in a line in the morning sky, Saturn, Jupiter, Mars, Venus, and Mercury. Also present but not visible to the unaided eye are the dwarf planet Pluto, asteroid Vesta, Neptune and Uranus. Mercury is at its highest on the 17th. The Moon climbs down the ladder of planets, being close to Saturn on the 19th and Jupiter on the 22nd.

The Last Quarter Moon is Tuesday, June 21. The Earth is at solstice, when the day is shortest, on the 21st. 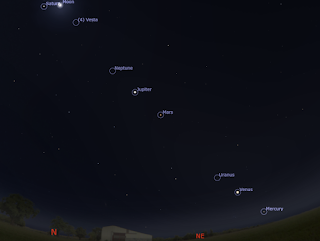 Morning sky on Sunday June 19 as seen from Adelaide at 5:52am ACST (90 minutes before sunrise). The waning Moon is near Saturn.

Saturn, Jupiter, Mars, Venus and Mercury form a line (Uranus, Neptune and the Asteroid Vesta are in the line too, but all need at least binoculars to see).

Over the coming week the waning Moon will visit each of the bright planets and is close to Jupiter on the 22nd. 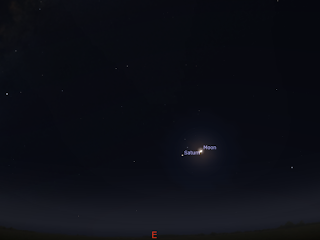 The evening sky on Saturday, June 18 at 23:00 ACST, Saturn forms a triangle with delta and gamma Capricornii, and is close to the waning Moon. 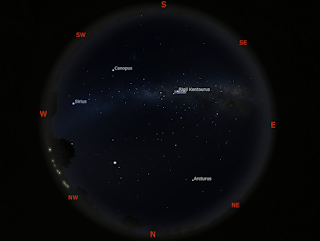 Between the bright star Canopus and the Southern Cross are a wealth of binocular objects to discover.

Saturday and Sunday you may see a bright ISS pass around this time (bright dot above the northwest).

Mercury is at its highest in the morning twilight.

Mars forms a line with Saturn, Jupiter, Venus and Mercury (and Uranus and Neptune).

Jupiter climbs higher in the morning twilight below Saturn and above Mars. Jupiter is visited by the Moon on the 22nd.

Saturn climbs away from Mars, Jupiter, and Venus. Saturn is visited by the Moon on the 18/19th.