The Full Moon is Tuesday, June 14, this is a perigee ("super") moon. The five bright classical planets are visible in a line in the morning sky, Saturn, Jupiter, Mars, Venus, and Mercury. Also present but not visible to the unaided eye are the dwarf planet Pluto, asteroid Vesta, Neptune and Uranus. Uranus is a binocular object and is approached by Venus. Between the 11th to 13th Venus and Uranus fit in the same binocular field.

The Full Moon is Tuesday, June 14.  The Moon is at perigee, when it is closest to the Earth, on June 15. next months perigee Full Moon is even better. 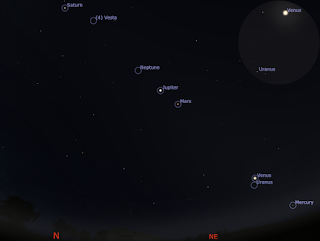 Morning sky on Saturday June 11 as seen from Adelaide at 5:49 am ACST (90 minutes before sunrise). Saturn, Jupiter, Mars, Venus and Mercury form a line (Uranus, Neptune and the Asteroid Vesta are in the line too, but all need at least binoculars to see). Venus and Uranus are close and  at their closest on the 12th.

The inset shows the binocular appearance of the Venus and Uranus at this time. 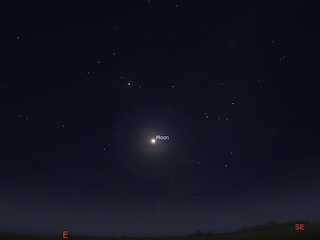 The evening sky on Tuesday, June 14 at 18:41 ACST, ACST, 90 minutes after sunset (click to embiggen). The Perigee Full Moon is rising just below Scorpius. 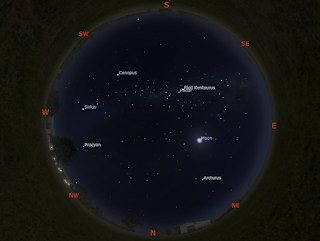 Between the bright star Canopus and the Southern Cross are a wealth of binocular objects to discover. However the nearly full moon will make many difficult to see.

Mercury is rising in the morning twilight.

Venus is lowering in the morning twilight and has a close encounter with Uranus on the 11th-13th..

Mars forms a line with Saturn, Jupiter, Venus and Mercury (and Uranus and Neptune).