The First Quarter Moon is Monday, May 9. Four bright planets are visible in a line in the morning sky. Saturn, Mars, Venus and Jupiter. Jupiter is climbing higher in the sky leaving Venus behind. The Eta Aquariid meteor shower has good rates in the morning between the 7th to 9th of May.

The First Quarter Moon is Monday, May 9. The Moon is at apogee, when it is furthest from the Earth, on May 5. 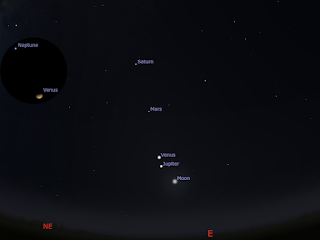 Morning sky on Saturday, May 7 as seen from Adelaide at 5:30 am ACST (90 minutes before sunrise). Saturn, Mars and Venus form a line with Jupiter. 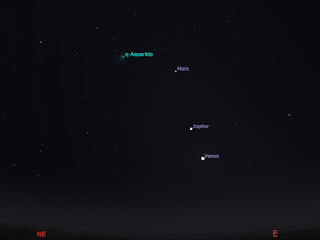 The north-eastern horizon as seen from Adelaide at 5:00 am ACST, the eta Aquariid radiant is marked with a starburst. Similar views will be seen elsewhere in Australia at the equivalent local time (click to embiggen).
The eta Aquariid meteor shower, which is produced by the debris from Halley’s Comet, will peak on May 6, 08h UT, which is sadly after sunrise on May 6 (late afternoon).
Despite this, we will have worthwhile rates on the weekend mornings of May 7, May 8 and May 9, from 3:00 AM to 5:00 AM local time Australia-wide, where people with dark skies should see a meteor around every three minutes.


While the peak is on the morning of the 6th during daylight, the peak is really broad and viewing from the 7-9 will give you decent rates of around 3-4 meteors per minute from dark sky sites.  For more details and rates from various cities see my eta Aquariid site. 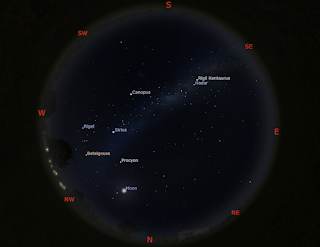 Whole sky on Saturday, May 7, 18:54 ACST, 90 minutes after sunset (click to embiggen). Orion can be seen above the western horizon. As Orion sinks Scorpius rises above the Eastern horizon. Between the bright star Canopus and the Southern Cross are a wealth of binocular objects to discover.

Mercury is difficult to see low in the twilight glow.

Jupiter climbs higher in the morning twilight below Saturn and Mars. Over the Week Jupiter leaves Venus behind.