The First Quarter Moon is Saturday April 9. Mars is readily visible in the morning sky just above bright Venus and below Saturn. Over the week Saturn moves away from Mars. Jupiter is climbing higher in the twilight. On the 13th Jupiter and Neptune are spectacularly close (telescope only). 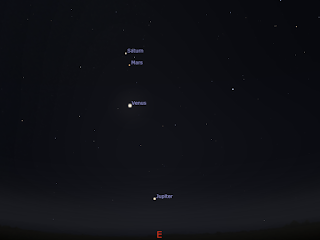 Morning sky on Saturday April 9 as seen from Adelaide at 5:10 am ACST (90 minutes before sunrise). Venus and Mars form a line with Saturn. Jupiter is low to the horizon. 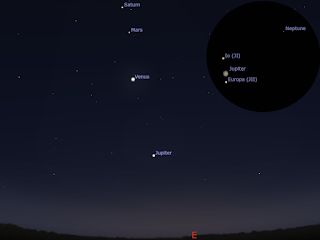 Morning sky on Wednesday April 13 as seen from Adelaide at 5:43 am ACST (60 minutes before sunrise). Mars and Saturn form a pair with Venus below. Jupiter is above to the horizon with Neptune. The inset shows the medium power telescopic view of the pair. 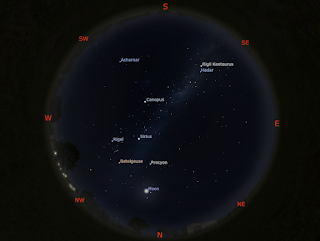 Whole sky on Saturday April 9, 19:24 ACST, 90 minutes after sunset (click to embiggen). Orion, and Taurus can be seen above the north-western horizon. Between the bright star Canopus and the Southern Cross are a wealth of binocular objects to discover and the first quarter Moon may make the dimmer objects harder to see..

Mercury  is lost to view.

Venus is high in the morning twilight and is moving away from Mars. Venus forms a line with Mars and Saturn.

Mars is rising higher, forming a widening pair with Venus and Saturn.
Jupiter climbs higher the morning twilight below Venus, Saturn and Mars. On the 13th Jupiter and Neptune are spectacularly close (telescope only).
Saturn  climbs away from mars and Venus.
Printable PDF maps of the Eastern sky at 10 pm AEST, Western sky at 10 pm AEST. For further details and more information on what's up in the sky, see Southern Skywatch.