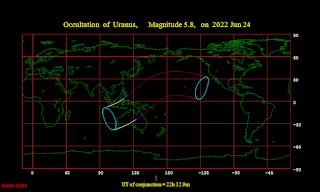 On the morning of Saturday June 25 the Moon and and Uranus are very close and an occultation is seen in Western Australia, Northern Territory and Far North Queensland.

Times for selected cities in these areas are given in the table below, time will be similar for nearby locations. Times in UT for other Australian cities can be found in the tables at the IOTA site.

The northern Territory and northern Western Australia have the best views,  in Far North Queensland Uranus emerges from behind the Moon in daylight, and will be very hard to see. In Perth and Fremantle the Moon is just 3° form the horizon at disappearance, so a very difficult target.

While Uranus is bright enough to be visible under dark sky condition to the unaided eye,the combination of moonlight and advancing twilight means that binoculars or a small telescope are needed to see Uranus.