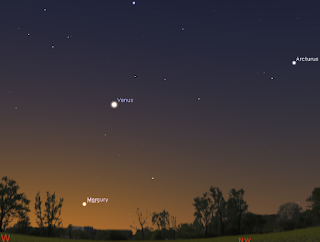 Evening sky on Thursday, August 19 showing the western sky as seen from Adelaide at 18:25 ACST (45 minutes after sunset). Mercury is close to Mars with Venus above.

(similar views will be seen Australia wide at the equivalent local time, 45 minutes after sunset)

Mercury  returns to the Evening twilight by mid-month and is at its best late this month and early next month. On the 1st Mercury is lost in the twilight. On the 15th Mercury is just over a hand-span above the western horizon an hour after sunset. Mercury moves closer to Mars and the pair are just 0.2 degrees apart, easily fitting into telescope eyepieces, on the 19th. The pair are best seen around 40 minutes after sunset when the sky is a bit darker, but you will need a fairly level, unobstructed horizon as the pair are just a hand-span and a half above the western horizon. Mercury is brighter than Mars at this time. In the last week of August Mercury, Venus and Spica make a nice line in the late evening twilight. On August 28 Mercury is a finger-width from Zavijava (Beta Viginis). By the 30th Mercury is just under a hand-span from the western horizon an hour and a half after sunset, with Venus and Spica above.

Venus is now easily visible in the evening sky from 30 minutes after sunset (I can see it as early as 10 minutes after sunset). Venus dominates the evening twilight leaving Mars and Regulus behind as it comes closer to closer to the bright star Spica. Venus now a distinct "gibbous Moon" shape. On the 11th Venus is close to the thin crescent Moon. The pair (just) fit into the field of view of a 10x50 binoculars. On the 14th Venus is just half a Moon diameter from Zavijava (Beta Viginis). By mid-month at astronomical twilight, we can enjoy the sight the sight of bright Venus low in the west mirroring bright Jupiter in the east. In the last week of August Mercury, Venus and Spica make a nice line in the late evening twilight.

Mars is low above the western horizon, best seen an hour after sunset at the beginning of the month but progressively lowering and by the end of the month it will be difficult to see in the twilight. Mars is close to the crescent Moon on the 10th and the pair fit into a binocular field. From the 17th to the 21st Mars and mercury are close being closest on the 19th at less than 1 lunar diameter apart.

Jupiter is readily visible around 9 pm local time and continues to climb into the late evening sky. On the 19th, Jupiter is at opposition, when it is biggest and brightest as see from Earth. By mid-month at astronomical twilight, we can enjoy the sight the sight of bright Venus low in the west mirroring bright Jupiter in the east. Once Venus has set Jupiter dominates the night sky. On the 21st the waxing Moon is between Saturn and Jupiter. On the 22th the Full Moon is close to Jupiter. Telescopically Jupiter will be best late evening to the early morning when it is highest above the northern horizon.

Saturncan be easily seen from astronomical twilight (an hour and a half after sunset) from the beginning of August. Saturn is at Opposition, when it is biggest and brights as seen from Earth, on the 2nd. On the 20th the nearly full moon forms a line with Saturn and Jupiter. On the 21st the moon is between Jupiter and Saturn. Then on the 23rd the waning moon again forms a line with Jupiter and Saturn. The beginning of the month Saturn should be best for scopes around 11 pm local time (it will be good before then, but it is better when it is highest and in still air). As the month goes on Saturn rises earlier and it and Jupiter are prominent below the teapot of Sagittarius.