The Southern Delta-Aquarids meteor shower runs from from 12 July to 23rd August, peaking on Friday July the 30th. The number of meteors you will see depends on how high the radiant is above the horizon, and how dark your sky is. This shower is fairly faint, with the highest rate of around a meteor every 4 minutes (more detail below).

The ZHR  for Southern Delta Aquariids is 25 meteors per hour. The figure ZHR is zenithal hourly rate. This is the number of meteors that a single observer would see per hour if the shower's "point of origin", or radiant, were at the zenith and the sky were dark enough for 6.5-magnitude stars to be visible to the naked eye.

At 11 pm, face east, and look around 4 hand spans above the horizon. Jupiter is obvious as the brightest object above the horizon. The radiant is just above Jupiterr. This meteor shower should be visible from 10.00 pm until dawn. The Moon will significantly interfere this year, being close to the radiant.  The best rates will be at 23:00 pm on the evenings of the 29th and 30th. while the radiant is not at its highest then when he Moon rises the rates will drop significantly.

At 11pm people in the suburbs should see a meteor around once every 12 minutes, and in the country about once every 7 minutes on the evenings of the 29th and 30th. 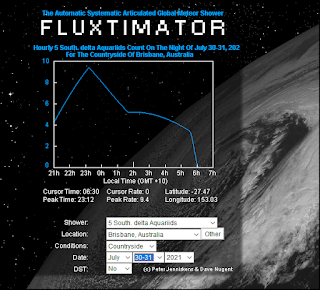 Use the NASA  meteor shower flux estimator for an estimate of what the shower will be like from your location. Unfortunately, both Chrome and Firefox have changed their security settings to prevent plugins from running, and the flux estimator only runs under Internet Explorer now.
You need to choose 5 Southern Delta Aquariids and remember to set the date to 29-30 July or 30-31 July 2021