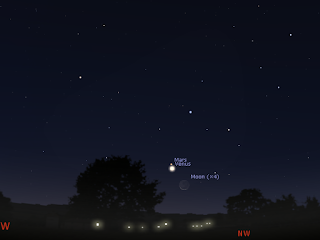 Evening sky on Saturday, July 12 showing the western sky as seen from Adelaide at 18:22 ACST (60 minutes after sunset). Venus is close to both Mars and the thin crescent Moon.

(similar views will be seen Australia wide at the equivalent local time, 60 minutes after sunset) click to embiggen.

This month the planetary action is mostly in the evening skies, Earth is aphelion, Saturn and Jupiter readily visible in the late evening skies, Venus has some interesting encounters and is close the beehive cluster. Mercury is good in the morning sky, "Blue" Last Quarter Moon and the Southern Delta Aquarids meteor shower.

Venus is now easily visible in the evening sky 30 minutes after sunset (I can see it as early as 15 minutes after sunset). Venus begins to dominate the early evening twilight and come closer to Mars. On the 3rd Venus passes the outskirts of the Beehive cluster, unlike Mars’s encounter last month the brilliance of Venus will make the cluster hard to see even in binoculars. On the 12th Venus and Mars are a finger-width apart and Venus is a mere 3 finger-widths from the crescent Moon. On the 13th Venus and Mars are half a finger-width apart. On the 21st and 22nd Venus is nearly to finger-widths from the bright star Regulus.

Earth is at aphelion on July 6 when it is furthest from the Sun.

Jupiter Jupiter is readily visible around 11 pm local time and continues to climb into the late evening sky. On the 25th the waning Moon is between Saturn and Jupiter. On the 26th the Moon is close to Jupiter

The Southern Delta-Aquarids meteor shower runs from from 12 July to 23rd August, peaking on Friday July the 30th. The number of meteors you will see depends on how high the radiant is above the horizon, and how dark your sky is. This shower is faint, with the highest rate of around a meteor every 7 minutes