The First Quarter Moon is Saturday, July 17.  Mercury lowering in the morning sky. Venus is readily visible in the evening twilight and is leaving Mars behind as it approaches the bright star Regulus. Venus is closest to Regulus on the 22nd. Saturn and Jupiter are visible late in the evening sky.

The First Quarter Moon is Saturday, July 17. The Moon is at Perigee, when it is closest to Earth, on the 21st. 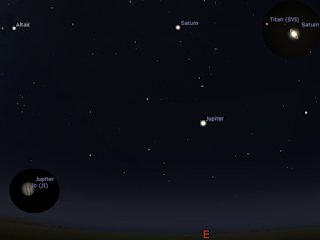 Evening sky on Saturday, July 17 showing the eastern sky as seen from Adelaide at 22:00 pm ACST. Saturn and Jupiter form a line in the late evening sky
The insets shows the telescopic views of Jupiter and Saturn at this time. Io is crossing the face of Jupiter.
Similar views will be seen elsewhere in Australia at the equivalent local time, click to embiggen. 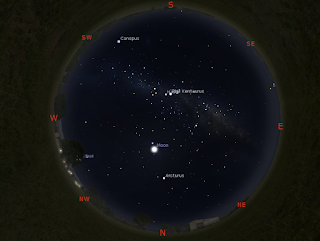 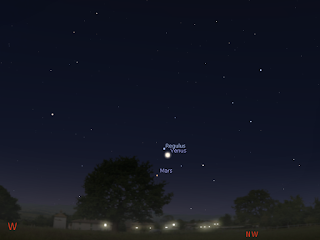 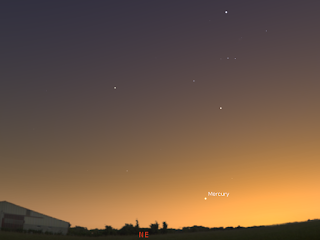 Morning twilight sky at 6:53 ACST (30 minutes before sunrise), on Saturday, July 17 facing east as seen from Adelaide.
Mercury is visible low in the twilight.

Similar views will be seen elsewhere in Australia at the equivalent local time  (30 minutes before sunrise)
Mercury is now low in the morning twilight this week, this week will be the last opportunity to spot the fleet planet this month.

Venus is visible in the late twilight.  I have been able to see Venus from 15 minutes after sunset and it is easily seen 60 minutes after sunset.  Venus has passed Mars and closes in on the bright star Regulus, being closest on the 22nd.
Mars is visible in the evening sky above the north-western horizon in the early evening. Mars is being left behind by Venus after last weeks close approach.
Jupiter is now above the eastern horizon well before midnight.
Saturn is now rising well around 8pm.
Printable PDF maps of the Eastern sky at 10 pm AEST, Western sky at 10 pm AEST. For further details and more information on what's up in the sky, see Southern Skywatch.

Comments:
Thank you 😊 enjoy your blog all the time !