The First Quarter Moon is Friday October 23. The bright planets Venus and Mars are visible in the early morning skies.  Three bright planets are dominate the evening sky. Mars is past opposition but is still making the sky stunning along with  Jupiter and Saturn. On the 22nd and 23rd The Moon forms a line with Jupiter and Saturn and on the 29th it is close to Mars. Orionid Meteor shower morning Thursday 22 to Saturday 24th. 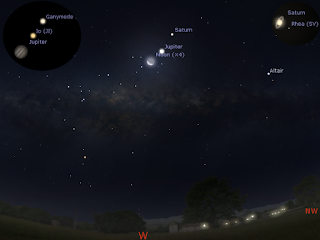 Evening sky at 21:06 ACDST (90 minutes after sunset) on Thursday, October 22 facing west as seen from Adelaide. The pair of Jupiter and Saturn are above the north-west horizon forming a line with the Moon. 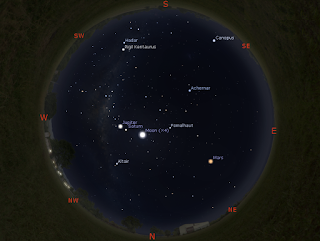 Three bright planets are visible stretching west to east. Jupiter, Saturn and Mars. The Moon joins the lineup this week. 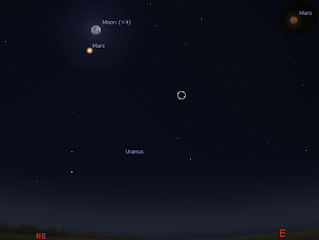 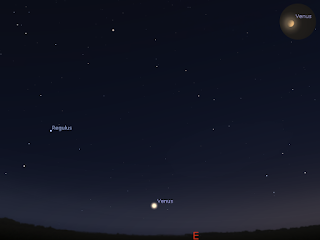 Morning sky on Saturday, October 24 showing the north-eastern sky as seen from Adelaide at 5:25 am ACDST (60 minutes before sunrise). Venus is getting lower to the horizon. 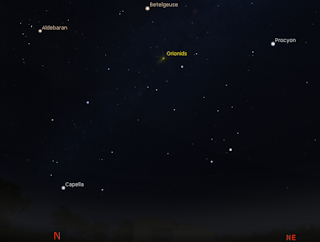 The Orionids are the debris from Halley's comet. The Orionids maximum is on October 22 UT (October 23 Australian time). but good rates are seen on the 22nd. For more details and observing hints see my Orionid page.
This week three bright planets,  Jupiter, Saturn and Mars can be  seen at astronomical twilight, 90 minutes after sunset. Mars will be low on the horizon but bright red Mars is unmistakable. This week the waxing Moon joins the line-up.


Mercury is lost in the twilight..

Mars is visible in the morning sky to the west, It is now readily visible in the evening sky. Mars is close to the variable star Mira, which is still reasonably bright. Mars was at opposition, when it is biggest and brightest as seen from Earth, on the 14th, but is still worthwhile observing. Observing details and more at the Mars Opposition site.
Jupiter can be readily seen in the early evening sky. Jupiter and Saturn start around a hand-span apart at the beginning of the week but slowly draw closer. The pair are prominent in the evening skies along with Mars. Jupiter is setting around 1:30 am local time.
Saturn too is visible in the early evening skies and is also still an excellent sight.
Printable PDF maps of the Eastern sky at 10 pm AEST, Western sky at 10 pm AEST. For further details and more information on what's up in the sky, see Southern Skywatch.

Comments:
We're in Perth, and my son saw an unusually huge red crescent moon low on the western horizon coming home about 11.30pm WST on Wed 22 Oct. Is that about right? He thought it most astonishing!