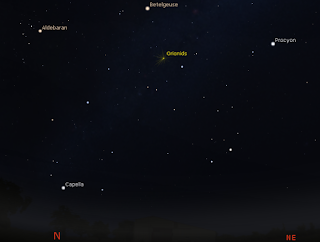 This year the waxing Moon sets before the radiant rises significantly so won't interfere with the shower. 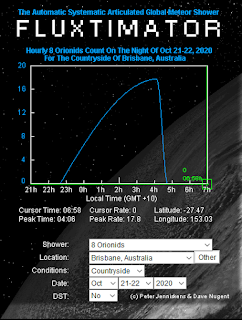 You can find out the predicted rates for your location using the NASA meteor flux estimator (use 8 Orionids and make sure you set the dates to 21-22 October 2020).
Unfortunately, both Chrome and Firefox have changed their security settings to prevent plugins from running, and the flux estimator only runs under Internet Explorer now.
You can follow the progress of the shower at the IMO Orionids live page.

The following table show the predicted peak rates at around 5 am local time on the mornings of the 21st, 22nd and 23rd of October for a number of cities under dark sky conditions (rates under suburban or city light conditions will be lower). Rates will be similar at the same latitude as these cities, and rates will be intermediate at spots between these cities (eg Sydney will be a roughly the Same as Perth).

Comments:
Thank you for the info! I wasn't sure if it was tonight or tomorrow that I could catch a glimpse. Finally found something with straightforward details, so I thank you