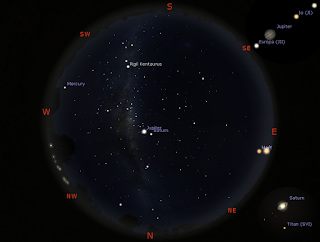 Four bright planets are visible stretching west to east. Mercury Jupiter, Saturn and Mars.  The Moon is just below Mars. The insets show the telescopic views of Jupiter and Saturn at the same magnification at this time.

Mercury early October is an excellent time to see Mercury in the evening.After mid month Mercury rapidly sinks towards the horizon.

Venus is in Leo and is spectacularly close to the bright star Regulus on the 3rd. Venus is close to the crescent Moon on the 14th.

Mars is close to the Moon on the 3rd and is at opposition on the 14th.

Jupiter is prominent in  the evening sky and comes closer to Saturn over the Month. On the 22nd Jupiter, the Moon and Saturn form a line in the evening sky. On the 23rd the lineup is Jupiter, Saturn and the Moon.