The Full Moon is Wednesday, February 20. Perigee ("super") Moon on the 19th/20th. Mars is visible low in the evening skies. Venus is bright in the morning sky with Jupiter above it and Saturn below. Saturn comes closer to Venus over the week and the pair are closest on the 19th. Comet C/2018 Y1 (Iwamoto) is be bright enough to be easily seen in binoculars early in the week.

The Full Moon is Wednesday, February 20. This is a perigee ("super") Moon on the 19th/20th. This year Perigee on Feb 19 will be 6 hours from Full (which occurs at around 2 am in the morning of the 20th) and the full Moon of Sep 13 will be 15 hours from apogee, giving a somewhat better contrast than the perigee Moon of Jan 21 (14 hours between perigee and full). This year (Feb/Sep) is the best pairing until 2032. 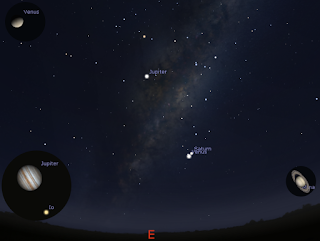 Morning twilight sky on Tuesday, February 19 looking east as seen from Adelaide at 5:20 ACDST (90 minutes before sunrise). Jupiter is high in the morning sky above the pair of Venus and Saturn below it. At this time Venus and Saturn are at their closest. The left upper insert inset shows the telescopic view of Venus at this time. the lower left insert shows the telescopic view of Jupiter at the same scale and the lower right that of Saturn. 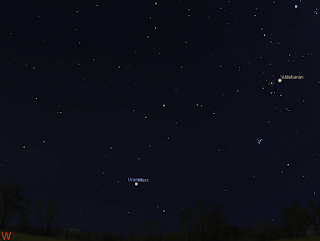 Evening sky on  Saturday, February 16 as seen looking north-west from Adelaide at 21:40 ACDST (90 minutes after sunset). Mars is the brightest object above the western horizon.Uranus is visible in binoculars not far away. 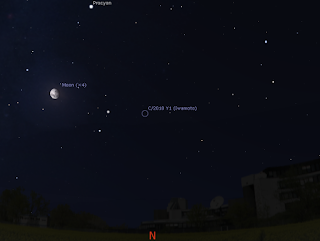 Comet C/2018 Y1 as seen looking north from Adelaide at midnight ACDST on Saturday, February 16, when the comet is highest. Similar views will be seen in elsewhere in Australia at the equivalent local time (click to embiggen).

C/2018 Y1 is a "bright" comet that should be readily visible in binoculars at its brightest. Sadly, it is best seen around midnight, but is well placed for Australian viewers. Unfortunately the moon now begins to interfere with the comets visibility. 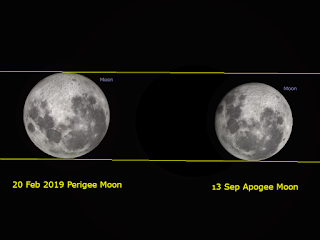 Chart comparing the binocular/telescopic appearance of the February 20 2019  Full Perigee Moon with the apogee Moon of  September 13 2019 .

This year Perigee on Feb 19 will be 6 hours from Full (which occurs at around 2 am in the morning of the 20th) and the full Moon of Sep 13 will be 15 hours from apogee, giving a somewhat better contrast than the perigee Moon of Jan 21 (14 hours between perigee and full). This year (Feb/Sep) is the best pairing until 2032.

The problem is, while the Moon is close this time around, it doesn't actually translate into something you can easily see with your unaided eye. Mondays Full Moon will be around 14% larger and 30% brighter than September's apogee Full Moon.So unless you have a good memory, you won't see much (but it will be a good opportunity to photograph the full Moon, then again in September and compare the images like I did for the Jan 21 perigee Moon).

Venus is bright in the morning skies below Jupiter. Venus is close to a number of interesting clusters, Venus is initially within a binocular field of the the beautiful globular cluster M22 but rapidly moves away. Saturn is coming closer to Venus, and the pair are closest on the 19th.

Mars is in Pisces and is readily seen as the brightest object in the western evening sky. Mars sets just before 11pm. Mars is coming moving away from Uranus but the pair can still be seen in a binocular field early in the week.

Saturn is climbs higher in the morning sky heading towards Venus. The pair are closest on the 19th.

iTelescope ALERT! comet C/2018 Y1 Iwamoto at its b...
Seeing comet C/2018 Y1 ( Iwamoto ) at its brightes...
The Sky This Week - Thursday February 7 to Thursda...
Moon Images from the 100 Hours of Astronomy
Seeing C/2018 Y1 ( Iwamoto ) from Australia (Febru...
Don't forget, early morning action as the crescent...
Southern Skywatch February 2019 edition is now out!
The Sky This Week - Thursday January 31 to Thursda...
A belated Christmas and Birthday reflection
Images from the Perigee ("super") Moon of 21 Janua...