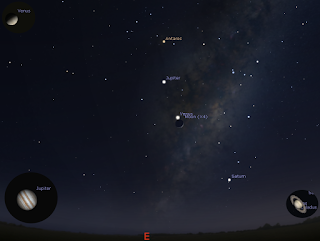 Morning twilight sky on Friday, February 1 looking east as seen from Adelaide at 5:34 ACDST (60 minutes before sunrise). Venus is bright and is close to the crescent Moon.  Jupiter is above Venus and Saturn below it.


The February edition of Southern Skywatch is now up.

Mercury  is in the evening sky but too close to the horizon to see in the twilight.

Jupiter is close to waning Moon on the 28th.

Mars is close to the waxing Moon on the 10-11th. Mars and Uranus are closest on the 19th.

Saturn climbs higher in the morning sky chasing then catching Venus on the 19th.

February 5; Moon at Apogee; February 19 Moon at perigee (near perigee full Moon, the second so called "super Moon" of this year, with full Moon on the 20th, this year is the best perigee/agpogee full Moon combination until 2032)