A belated Christmas and Birthday reflection 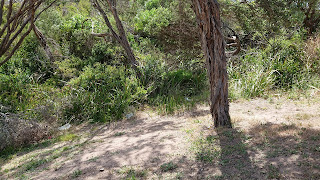 Christmas was a bit rough for me. Triple J was playing Paul Kelly's "How to make gravy" and running a competition to work out who the person who would make the gravy was. So the song and discussion was on quite a bit, making it hard to avoid.

"How to make gravy" always makes me cry uncontrollably since Jack died. Even writing about it is uncomfortable. Despite it being a song about loss and yearning to be with family and worry that your role in the family will be replaced (and maybe not as well), I have no idea why this song brings feelings of Jack back so vividly and forcibly.

Loss and yearning plays a big role of course, but Jack never played a central role in the cooking of family Christmas feasts (the main concern of the singing character which stands for his other worries about loss). He certainly never made gravy (although he consumed it with gusto), however on two occasions he played a central role in making dessert pizzas with his brothers and cousins. But I suppose the song just brings home the gap in the family Christmas celebration, the empty chair at the table. All I can say is that song brings grief bubbling unbidden and uncontrollably to the surface in the way no other memory of Jack does.

This was the third Christmas without Jack, and the first without mum, a double dealing of loss. Mum was at the Newberry Hill Christmas celebration only once, but ever after I would hold the phone up on Christmas day so everyone could shout "Merry Christmas" at her from the long table. She loved it, but I will never again make this small ritual of connection. 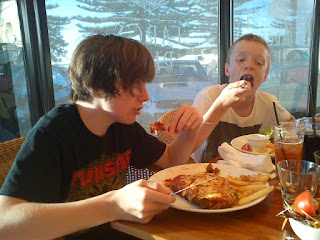 The Triple J connection continues, but in a good way. Jack would have turned 22 this year on the Rum Rebellion Day weekend. Triple J played the hottest 100 countdown on his birthday just passed, so his natal day was marked by the best independent Australian music of 2018. He would have loved that.

Jack may not  have been a maker of gravy, but we had a semi-occasional birthday ritual of him consuming an enormous schnitzel, which started when poppa Tom challenged him to eat an similarly enormous schnitzel when he was a young lad (he succeeded to everyone's surprise).

This year of course no schnitzels were consumed, the pool untroubled by joyful, energetic young men laughing, jumping and splashing to help him celebrate. But his mate Alex came over and we drank many cups of coffee and discussed life, remembering Jack, coping and animae and manga.

Another loss will be the somewhat late birthday cards from mum, bearing $50 checks for the boys. They will come no more, along with the birthday phone calls, somewhat louder each year as mum got progressively deafer. Another ritual of connection with distant loved ones gone.

Soon mums ashes will rest nestled up to dads, a simple bronze plaque carrying the lines of their service to country and the love of their family. Amounts those ashes will be the ashes of messages of love that accompanied her final journey.

Jack's resting place has no plaque, but bushland, birdsong and a growing collection of beautiful stones to carry his memory with us.

In the future we will have other rituals of connection, as the families grow older, and the children move away with the new lives they forge. One day we will be the distant voices they yell Christmas greetings to, metaphorically passing the gravy recipe to new hands, to carry on where we cannot.

Comments:
Ian, That's a very thoughtful post.
It raised some sadness for me as I have attended a few funerals this year.
I guess we can only say "I'm proud and happy to have known her or him"
Alan