The First Quarter Moon is Wednesday, February 13. Mars is visible low in the evening skies and is visited by the Moon on the 10th-11th. Mars and Uranus are close on the 12th-13th. Venus is bright in the morning sky with Jupiter above it and Saturn below. Saturn comes closer to Venus over the week. Comet C/2018 Y1 (Iwamoto) should be bright enough to be easily seen in binoculars. 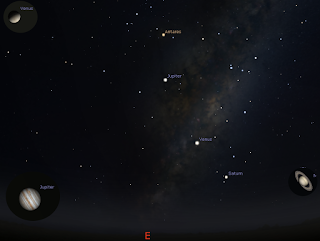 Morning twilight sky on Saturday, February 9 looking east as seen from Adelaide at 5:11 ACDST (90 minutes before sunrise). Venus is bright with Jupiter above Venus and Saturn below it. During the week Saturn draws closer to Veuns The left upper insert inset shows the telescopic view of Venus at this time. the lower left insert shows the telescopic view of Jupiter at the same scale and the lower right that of Saturn. 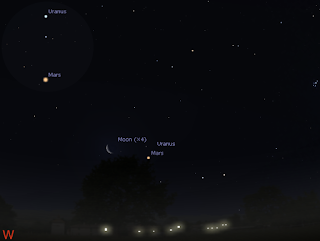 Evening sky on  Sunday, February 10 as seen looking north-west from Adelaide at 21:48 ACDST (90 minutes after sunset). Mars is the brightest object above the western horizon.Uranus is visible in binoculars not far away. The inset is the approximate view in 10x50 binoculars of Mars and Uranus on the 12 when they are at their closest.


The Pleiades and Hyades also grace the north-western sky. 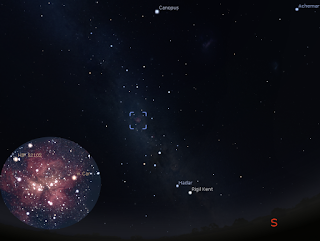 Evening sky on  Saturday, February 9 as seen looking South-east from Adelaide at 21:48 ACDST (90 minutes after sunset).

This week is is still a good time to observe our wonderful southern sky before the Moon gets too bright. The Moon is a waxing crescent that does get too bright until the end of the week so this is a good time to look at the wonderful clusters and nebula of our southern skies with the unaided eye or binoculars.

The Milky way stretches from the Southern cross (Wilto the Eagle to the people of the Adelaide Plains) in the south to the distinctive constellation of Orion and beyond. The Milky ways' satellite dwarf galaxies, the Magellanic clouds, (between and below the bright stars Canopus and Achernar) are easily seen away from the city lights. The braketed are shows the area of sky where the distinctive Eta Carina nebula is,The inset shows the approximate 10x50 binocular view of the are around the  Eta Carina nebula. 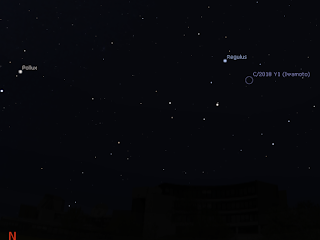 Comet C/2018 Y1 as seen looking north-east from Adelaide at midnight ACDST on Tuesday the 12th of February, when the comet is brightest. Similar views will be seen in elsewhere in Australia at the equivalent local time (click to embiggen).

C/2018 Y1 is a "bright" comet that should be readily visible in binoculars at its brightest.Sadly, it is best seen after midnight, but is well placed for Australian viewers, and the Moon will have set when the comet is at its brightest, making it easier to see.

Venus is bright in the morning skies below Jupiter. Venus is close to a number of interesting clusters, Venus is initially within a binocular field of the Trifid and Lagoon Nebula and is in binocular distance of the beautiful open clusters M24 and M25 by the end of the week, although Venuses brightness may make them difficult to see.Saturn is coming closer to Venus, and will be closest next week.

Mars is in Pisces and is readily seen as the brightest object in the western evening sky. Mars sets just before 11pm. Mars is close to the waxing Moon on the  10-11th. Mars is coming closer to Uranus and the pair will be at their closest on the 12th and 13th.

Saturn is climbs higher in the morning sky heading towards Venus.