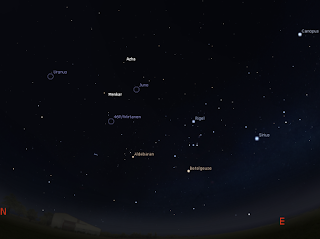 This month Saturn is lost from the evening sky, sky for the first half of the month as Mercury and Jupiter return to the morning sky.

Venus is lost to view in the twilight. Uranus is at opposition on the 24th and is (just) visible to the unaided eye in dark sky locations.  Venus climbs higher in the morning sky,  Jupiter and Mercury are close together in the morning sky on the 22nd.  Mars is is rapidly dimming and is close to Neptune on the 7th.

Mercury  is visible in the evening sky this month, meeting Jupiter on the 22nd.

Venus is climbing higher in the morning skies and is close to the crescent Moon on the 4th.  In even small telescopes it is a thin crescent (may also be visible as a crescent in good binoculars).

Jupiter is close to Mercury on the 22nd.

Mars was at opposition on July the 27th. Mars is close to Neptune on the 7th and the first quarter Moon on the 15th.

Saturn is low in the twilight. December 9 crescent Moon close to Saturn.