The New Moon is Friday, December 7.  Saturn and Mars are visible low in the evening skies. The crescent Moon is close to Saturn on the 9th, Venus is bright in the morning sky and is joined by Mercury late in the week. Comet 46P is visible in binoculars. Variable star Mira is bright.  The Geminid meteor shower begins at the end of the week.

The New Moon is Friday, December 7. The Moon is at apogee, when it is furthest from the Earth, on Wednesday the 12th. 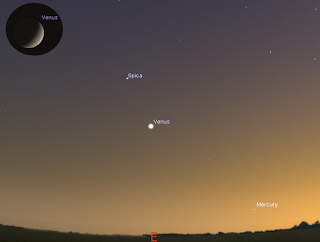 Morning twilight sky on Thursday, December 13 looking east as seen from Adelaide at 5:52 ACDST (30 minutes before sunrise). Venus is bright with Mercury low to the horizon below it. The inset shows the telescopic view of Venus at this time. 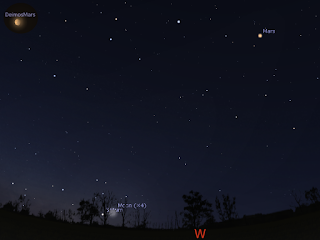 Evening sky on Sunday, December 9 as seen looking west from Adelaide at 21:26 ACDST (60 minutes after sunset). Saturn is just on the horizon near the crescent Moon with  Mars above. The inset shows the telescopic view of Mars at this time. 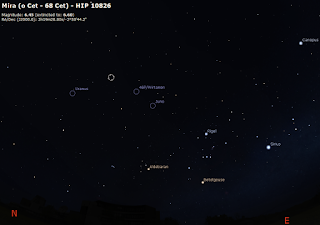 Evening sky on Saturday, December 8 as seen looking north-east from Adelaide at 22:06 ACDST (90 minutes after sunset).  The location of comet 46P and the variable star Mira is shown. Similar views will be seen elsewhere in Australia at the equivalent local time (and most of the Southern Hemisphere 90 minutes after sunset)). Click to embiggen.


Comet 46P is rapidly brightening and is roughly magnitude 5.0 now, readily seen as a fuzzy blob in binoculars. It may become bright enough to (just) see with the unaided eye in late December. More details on how to see it, along with charts suitable for printing, are here.

Mira (omicron ceti), a star in the constellation of Cetus the whale, is a  red giant that pulsates over a period of about 331 days and changes brightness from below naked eye visibility to a peak of round magnitude 2 (roughly as bright as gamma Crucis in the Southern Cross) in around 330 days. Mira is at peak magnitude this week, and may stay bright the rest of this month. Following a line drawn between Sirus and Rigel will bring you to Mira. 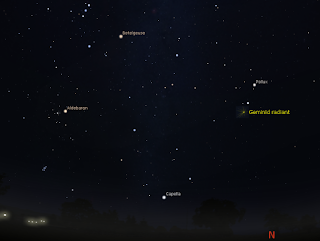 Geminids as seen from Brisbane facing north at 2:00 am AEST on the morning of December 14. The Geminid radiant is marked with a starburst. (similar views from elsewhere at equivalent local time eg Sydney 3:00 am AEDST, Adelaide 3:30 am, click to embiggen).

The radiant doesn't rise until just before midnight (daylight saving time) in most of Australia, so you will still have to disturb your sleep for this one. The peak is not until next Saturday when  Australians should see a meteor every one to two minutes under dark skies in the early morning of the 14th, between 1:00 am and 4:00 am local time. However, in the lead up to the peak you should see some decent meteors under dark skies. The further north you are the better the meteor rates. You can find predictions for your local site at the meteor flux estimator (choose 4 Geminids and date 14-15 December, don't forget to change the year to 2018). For more details see my Geminid page.


Venus has returned to the morning skies.

Jupiter  is lost in the twilight and will return to the morning sky mid December.

Mars is in Capricornius and is readily seen in the evening. Mars is now rapidly dimming and shrinking. When Sirius rises Mars is no longer the brightest object in the night sky aside from the Moon. In a telescope you may see a few features but viewing will be difficult. This week the "gibbous" shape of Mars will be obvious.

Saturn is low in the north-western evening sky in the early evening and is setting around 10:00 pm. Its closeness to the horizon means it is no longer a good telescopic target. It is close to the crescent Moon on the 9th.